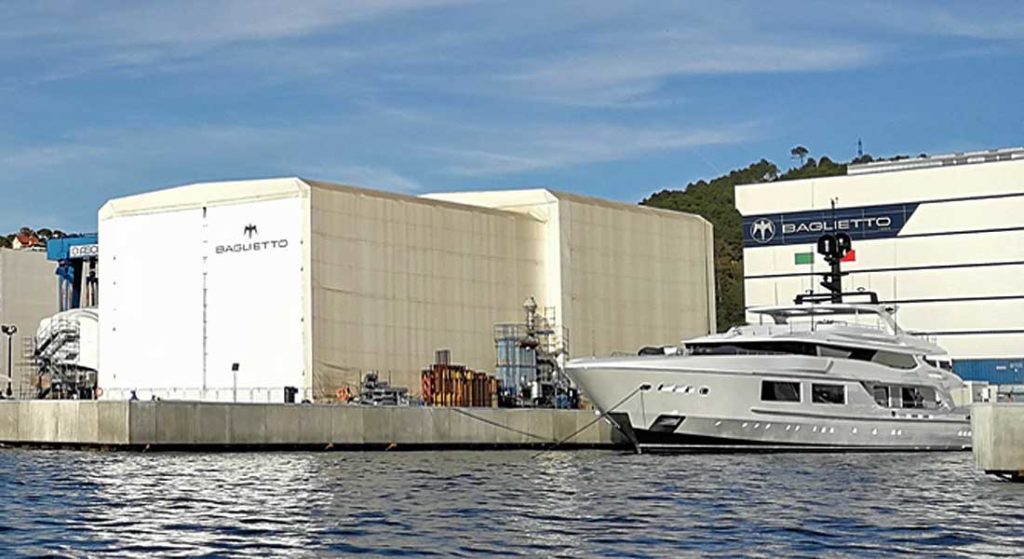 An Allied Marine yacht broker has filed a lawsuit against a client and Baglietto. He claims the two circumvented verbal agreements under which he would receive a commission. The lawsuit follows a related filing by the client. The owner requests a declaratory judgment that the broker is not due any commission from the megayacht purchase.

Court records reveal that the client is Miki Naftali, a real estate developer in New York. He owns a 130-footer (39.5-meter) in build at Baglietto. Scott Goldsworthy, the Allied Marine broker, states in his filings that he has been Naftali’s broker for six years. The Business Trial Group, Goldsworthy’s attorney team, claims he is due a $725,000 commission, representing five percent of the yacht purchase price of $14.5 million.

In his complaint, filed in Florida, Goldsworthy claims Naftali wanted him to serve as his broker for a new custom yacht, starting in 2016. Previously, Goldsworthy had represented him in the purchase and sale of brokerage yachts. In addition, Goldsworthy says that Naftali verbally agreed he would receive a five-percent commission. From 2016 to late 2017, the two held several meetings during which they outlined specifications, pricing, and potential shipyards. According to his complaint, Goldsworthy and Naftali narrowed the shipyards down to Baglietto, Cantiere delle Marche, and Rossinavi, with Baglietto accepting the bid proposal between the summer and fall of 2017.

However, “Prior to Naftali and Baglietto executing a contract for the new build yacht project, they collectively decided to exclude Goldsworthy from the contract,” the complaint states. It alleges that the client and shipyard decided to “deny him his commission even though the parties knew he was the procuring cause of the sale.” Goldsworthy further claims the oral agreement for the commission was with both Naftali and Baglietto, and that “numerous emails” with Naftali, Baglietto’s CEO, the naval architect, and interior designer confirmed it. Under Florida law, oral agreements have similar validity to written contracts.

Besides filing this lawsuit, Goldsworthy filed a separate motion, specifically a motion to dismiss, in New York. It is in response to Naftali claiming, in the same New York court, that no commission is due. In Goldsworthy’s motion, he mentions the above details. He additionally states that, during a meeting with Naftali, Baglietto CEO Michele Gavino, and a project manager in Fort Lauderdale in 2016, Gavino agreed to the commission if Naftali went through with the build.

Naftali tells a different story. According to his original New York filing, in 2016, Goldsworthy recommended that Naftali consider buying a trideck motoryacht in the 131-foot (40-meter) size range. The two then conducted meetings stateside and abroad with several shipyards. Some of the meetings involved Baglietto and Gavino. However, his legal team asserts that “Naftali never entered into a written agreement with Defendant in connection with his potential acquisition,” the court records state. Furthermore, the filing indicates that Naftali stopped working with Goldsworthy in late 2016.

In addition, Naftali’s team claim that Gavino reached out directly to Naftali in June 2017 to discuss projects in build. Later that year, the filing adds, the two began negotiations for a raised-pilothouse motoryacht. In January 2018, Club-M Yachting, a company which Naftali owns, signed an agreement with Baglietto for a yacht. “Defendant played no role in Plaintiffs’ construction of the Raised Pilot House Project,” Naftali’s filing states. “Accordingly, Defendant is not entitled to any sales commission in connection with Plaintiffs’ construction of a yacht.”

All parties are due in New York Supreme Court in early October. No hearing date is yet set for Goldsworthy’s lawsuit in Florida.

Following published reports, Baglietto issued a written statement. “Baglietto, by means of its CEO, Michele Gavino, wishes to point out that the company has not taken part in any illicit action taken by the subjects mentioned.” The statement continues, “In particular, Baglietto wants to point out that they have always conducted themselves and will continue to do so in a professional and ethical manner towards both the Owner and the brokerage community. Thus, Baglietto reserves the right to defend its behavior and reputation in any qualified office.”