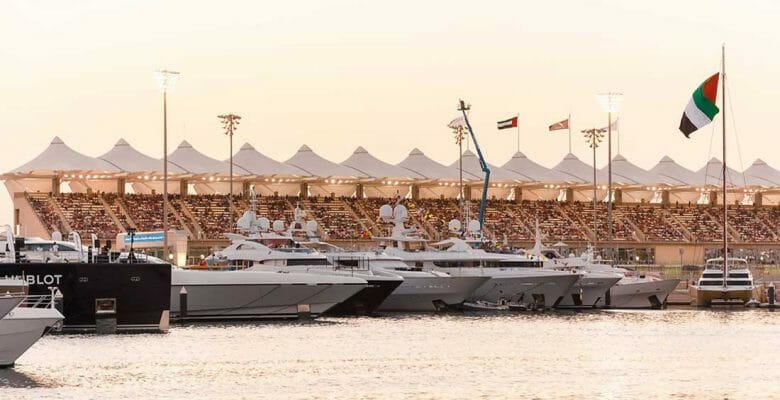 The first-ever Abu Dhabi Grand Prix took place back in November 2009, on the Yas Marina Circuit. Ten years later, this Formula One race returns to the same place, running through the upcoming weekend. While it may be the end-of-season race, it’s just the beginning of one of the biggest megayacht spotting seasons. Here are just some of the megayachts planning to take in all the action.

1. St. David. This Benetti has prime viewing position for the race. In addition, to ensure no one misses any of the action, the 197-footer (60-meter) is setting up a screen on her sundeck. That same screen will surely display stunning visuals come nighttime, as St. David is hosting some of the biggest VIP parties during the weekend. Additionally, the megayacht is reportedly hosting former F1 drivers Mark Webber and Jacques Villeneuve for meet and greets.

2. Pearl. While St. David has paying guests onboard, Pearl is a strictly private-use yacht. The 195-footer (59.4-meter) holds the distinction of being the biggest boat ever to launch from Palmer Johnson’s former Wisconsin shipyard. That occurred back in 1998.

3. Talisman C. While Talisman C was designed around the idea of carrying a healthy number of watertoys, during the Grand Prix, those toys will have to remain tucked away in her tender garage. Nevertheless, guests will still have a good time onboard. They have a large pool on the sundeck to soak in and take in the sights. The 231-footer (70.5-meter) additionally dazzles inside with several custom glass installations by Crystal Caviar, including one cascading through the spiral stairway.

4. Al Maqam. Perhaps the least-known among the yachts listed here, Al Maqam nonetheless makes for excellent megayacht spotting. She’s hard to miss, since she’s an all-wood vessel. Though details are few and far between, the few facts available publicly include her length of 154 feet (47 meters). In Arabic, her name means “gathering place.”

Overall, Yas Marina has 227 slips, several offering direct track views. The slips cater to yachts to 492 feet (150 meters) LOA, too. While the marina attracts visitors year-round, during the Abu Dhabi Grand Prix, it hosts about 24,000 racing fans, according to media releases. In addition, depending on the length of the yacht, owners and guests get access to the pit lanes before the race, to see the cars up close. Regardless, post-race concerts occur nightly, too.