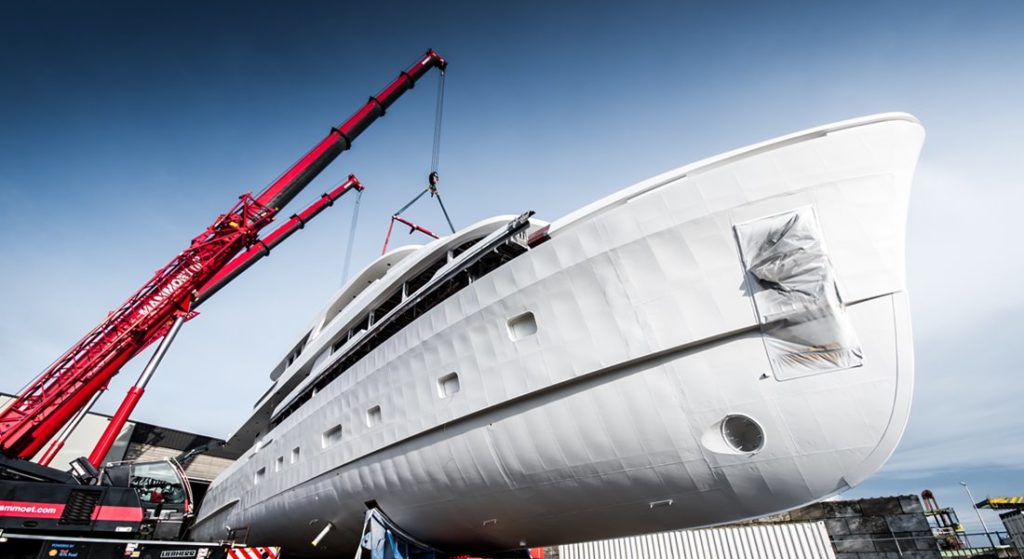 Eleven months after her keel laying, the second Moonen Martinique motoryacht, a.k.a. Moonen YN199, has a joined hull and superstructure. The 118-foot (36-meter) megayacht, under construction on spec, remains on pace for delivery in August 2020.

The Moonen Martinique series saw its first delivery in the form of Brigadoon, in 2018. Styling is by Rene van der Velden, a longtime partner of the shipyard. Naval architecture, meanwhile, comes from fellow Dutch company Diana Yacht Design, in conjunction with van der Velden. The idea behind the design is to offer buyers a steel-hulled project in a size dominated by fiberglass yachts. In addition, the goal is to offer them a global cruiser, again in a size where this is atypical. Brigadoon, for example, has a 4,000-nautical-mile range with Caterpillar engines. Moonen YN199 should perform similarly, also with a top speed around 16½ knots.

Since she’s a spec project, the megayacht still affords a buyer the ability to customize the interior. This means the woods, marbles, and more as well as the overall general arrangement. For starters, though, Studio Indigo has created a 12-guest configuration featuring six staterooms, along with accommodations for seven crewmembers. The UK-based design studio additionally suggests room layouts that maximize the enjoyment of the views, plus make moving about for guests and crew comfortable.

Nicky van Zon, the Moonen YN199 project manager, acknowledges the “challenging period over the past few months” for the builder. In July 2018, a Dutch court placed Moonen in bankruptcy. It was struggling financially due to the arrest of the yard’s then-full shareholder, accused of bribery. Courts has frozen his assets, which impacted the yard. (The yard was not involved in the alleged wrongdoings, however.) New ownership for Moonen stepped in later during the summer, taking it out of bankruptcy and letting YN199 proceed. “We’ve worked hard to ensure that project delays have been kept to a bare minimum,” van Zon says. “We’re all extremely proud that we have been able to reduce the delay in the construction of YN199, and this significant moment in the build of YN199 perfectly demonstrates our capabilities as a premium Dutch shipbuilder.”

In related news, Moonen has started construction on a third Moonen Martinique, measuring the same length.