You are here: Home / Yachts / Motoryachts / The Launch of Project Ragnar, at Icon Yachts 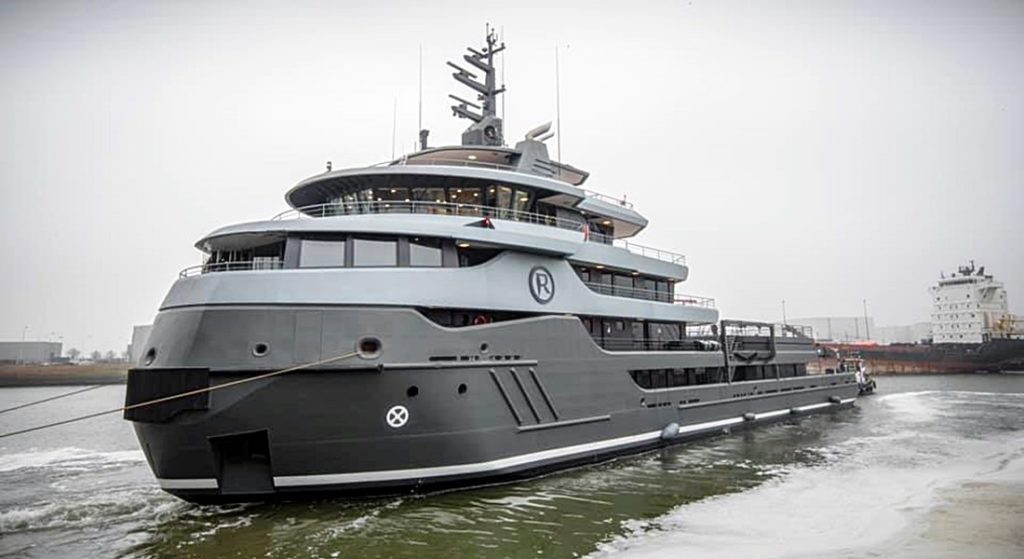 Earlier this month, we gave you an inside look at Project Ragnar, an extensive refit that has been at Icon Yachts for some time. Yesterday, the adventure yacht celebrated her official launch, in her official new role.

Suiting her purpose as a tough adventurer, Project Ragnar gets her name from a Viking king and warrior. She will embark on conquests of the seas in a few months. Particularly, this 223-footer (68-meter) will be able to take on some icy seas. This is due to her having an ice-class steel hull. In fact, the hull met Polar Code 5 standards when the vessel was first launched in 2012. Back then, she went by the name Sanaborg, and served ice-breaking needs in medium first-year ice conditions. The current owner acquired her in early 2017, from a shipping company. Then the owner took her to Icon Yachts shortly thereafter.

Additionally serving her adventurer purpose, Project Ragnar carries abundant sports craft. For example, two 26-foot (8-meter) tenders, two Laser sailboats, a personal sub, and several PWCs will be aboard. She additionally has a helipad for a Eurocopter model, which will take the owner and guests heli-skiing. But, the most unusual toy aboard is a Ripsaw EV. “EV” stands for Extreme Vehicle—and this is extreme for sure, a high-performance, swift, luxury super tank.

The interior of Project Ragnar has luxury appointments, too. The sneak peeks provided so far reveal rich woods. RWD is creating the decor around a medieval war concept, which unfortunately are still under wraps. But, the owner’s party of 16 will additionally have a massage room, a sauna, a cold plunge pool, and even a snow room to enjoy. In terms of staterooms, the megayacht has two master suites and six guest staterooms, all within a 46-foot (14-meter) beam.