You are here: Home / Yachts / Motoryachts / Majesty 120 Makes Her Debut 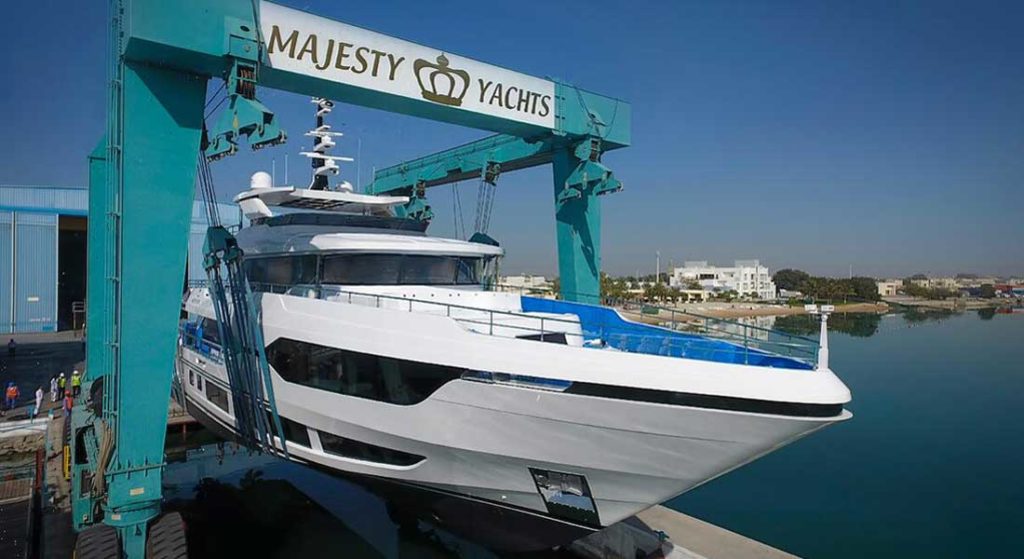 Mostly Middle Eastern buyers will get the first looks at the Majesty 120 when she makes her global premiere at the Dubai International Boat Show in mid-March. Just launched on February 18, the trideck megayacht is the newest model from Majesty Yachts.

Featuring five staterooms for an owner’s party of 11, the yacht employs carbon fiber construction. Started on spec, she followed a build schedule intent on completion this coming March. Gulf Craft, the parent company for the Majesty Yachts brand, finished the hull in the first quarter of 2019. It joined the hull with the full superstructure this past December.

Still on the technical front, the Majesty 120 is the brand’s first with electric systems instead of hydraulic systems. The idea was to eliminate bothersome sounds, as well as to lower maintenance needs and costs. The only traditional components the shipyard didn’t replace are conventional 2,600-hp MTUs and of course gensets.

To entice luxury seekers, the Majesty 120 bears an interior by Cristiano Gatto Design. With a 26-foot (8.1-meter) beam, the megayacht has a somewhat subdued decor, purposely. This is because Majesty Yachts does plan to market the model internationally. In fact, Paul Gray, Gulf Craft’s COO, says, “The Majesty 120 is a superyacht perfectly tailored to suit European and American markets, as well as appealing to our home GCC territories.” While there’s no set date yet for the project to premiere in the United States, the Majesty 140 came to these shores several months ago. Further to this point, the 120 shares styling with the 140, all created in-house.

With a sundeck said to be 30 percent larger than similar-size yachts, the Majesty 120 also has an asymmetrical configuration inside, to enhance the sense of volume and the views. Volume is 290 gross tons.