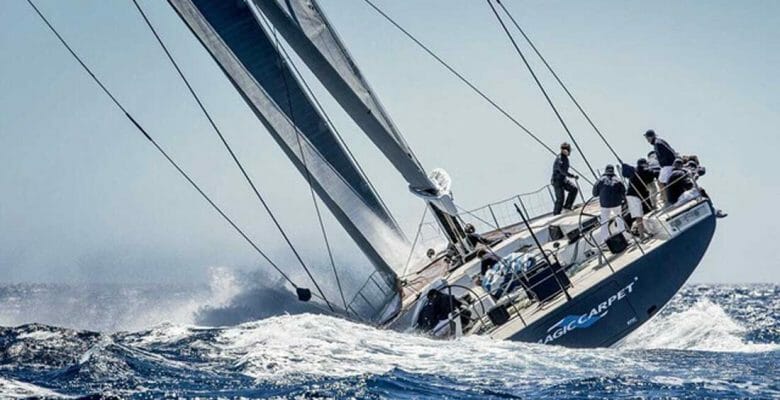 UPDATE, MARCH 24, 2020: The organizers for the Superyacht Cup Palma have cancelled the event, due to the COVID-19 pandemic.

Specifically, those two yachts are Magic Carpet 3 (above) and Ghost. Magic Carpet 3 is a Wally, from the WallyCento racing series. Ghost, meanwhile, launched from Vitters Shipyard as a performance craft. Neither yacht is a stranger to regattas, either. In fact, Ghost participated in the Superyacht Cup Palma way back in 2007, under different owners. Her current owner, who just acquired her, plans to take the helm himself. Magic Carpet 3 plans to give her a run for the proverbial money. While this is the yacht’s first Cup, “We have taken part in several Palma Vela regattas, so we are very familiar with the fantastic sailing conditions on offer out in Palma Bay,” says Capt. Danny Gallichan.

In fact, he continues, the owner and crew can’t wait to compete alongside one another. “The new Performance Class was a big factor for us, with the fleet racing starts and the high-intensity racing that goes along with it,” he says.

While the Superyacht Cup Palma Performance Class may be new, it’s not the first time that the organizers of the race have mixed things up. The Corinthian Spirit Superyacht Class came along, for example, just two years ago. Both complement the Original Superyacht Class.

Whether you wish to race in one of the divisions or catch the action from land, plenty of action is on tap. From June 17 to 20, the regatta includes dockside parties, an owners’ dinner, happy hours, and of course a prize-giving ceremony. Check the website for details, as well as information for the notice of race and how to register.