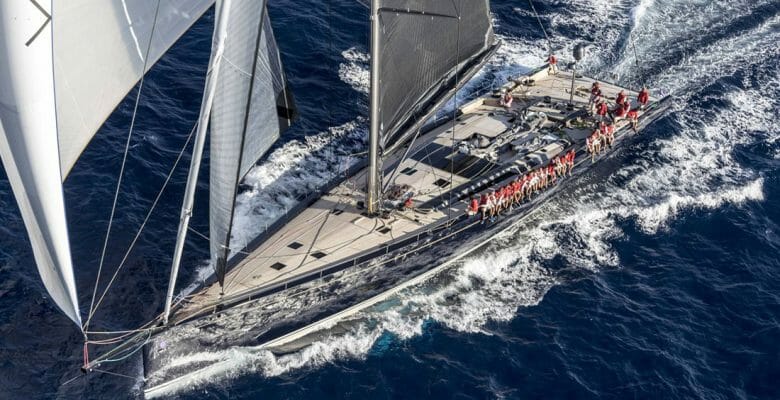 UPDATE, SEPTEMBER 21, 2020: The Italian courts have referred the lawsuit back to the British courts. The owner of My Song and Peters & May received the word following a hearing on September 10.

The owner of My Song, which suffered irreparable damage last year after falling off a transport ship, wants compensation for her replacement value. He has therefore sued the transport company, Peters & May.

Pier Luigi Loro Piana, president of the Italian fabrics and clothing company bearing his last name, took delivery of the yacht, a Baltic 130, in 2016. In May 2019, he had the yacht placed aboard a transport ship in Antigua, for carriage to Genoa, Italy. This was in preparation for the 2019 Loro Piana Superyacht Regatta in Sardinia. My Song had competed in the race previously, and won. On May 26, however, My Song fell overboard, while the ship was between Palma de Mallorca and Genoa. My Song lost her mast and partially sank. A salvage ship retrieved her and towed her to Palma de Mallorca for inspection. Holes penetrated her hull, among other damage.

Through a spokesperson, Loro Piana stated at the time, “The damage outside and to the interiors of the yacht mean it is not savable.” Additionally, he speculated that the carbon-fiber-composite My Song hit the transport ship’s side when she fell overboard. Regardless, he went on to say that further investigating would continue, for insurance purposes.

Initially, this summer Loro Piana filed the lawsuit in a Milan court. He claimed damages equal to the yacht’s construction value, €27 million (nearly $33 million). However, since Peters & May headquarters are in England, the lawsuit transferred to the Royal Courts of Justice in London. Just yesterday, a judge ruled that the case will remain there. But, lawyers for the owner of My Song are attempting to continue the case in Italy.

In the lawsuit, Loro Piana claims he did not sign a contract of carriage. Instead, he contends, since it was a booking note, it instead was a contract to arrange a contract. Meanwhile, Peters & May contends the booking note served as the contract. Additionally, it points to a clause in the booking note governing remuneration in case of casualty. This clause references deck shipment of cargo and insurance as such, versus full replacement value. Furthermore, Peters & May reiterated a statement it made a few days after the accident. “The primary assessment is that the yacht’s cradle—owned and provided by the yacht, warrantied by the yacht for sea transport and assembled by the yacht’s crew—collapsed during the voyage.”