You are here: Home / Yachts / Motoryachts / Nobiskrug Project 795 Moves on Out 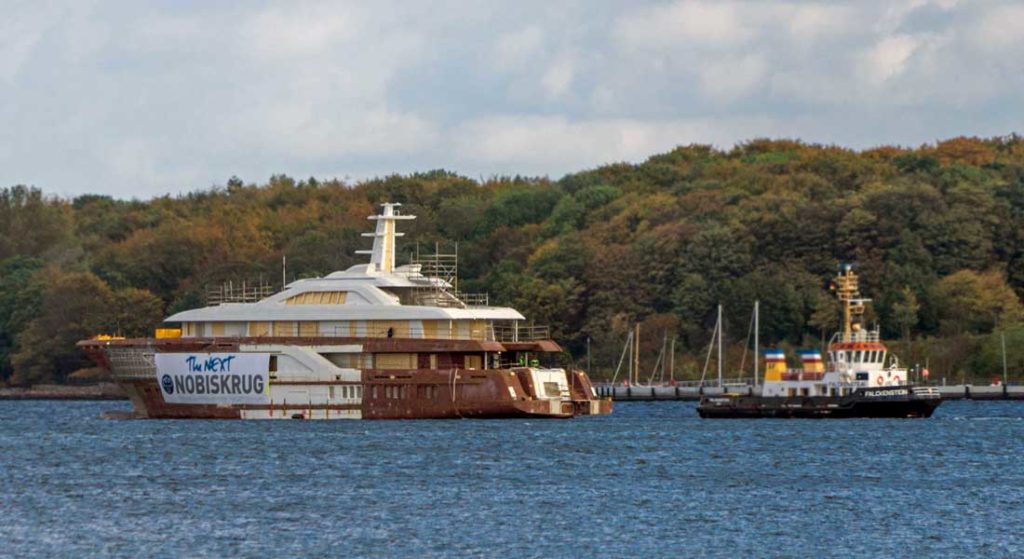 About a year after her keel laying, Nobiskrug Project 795 is checking off major milestones on her journey toward completion in 2021. Two tugboats (one visible here) gently nudged her from the waters outside her hull-construction shed to her outfitting shed, each sitting along the Kiel Canal in northern Germany.

Mesuring 229’7” (70 meters), the megayacht is largely a confidential project. For the time being, Nobiskrug will share that the owners selected Winch Design for both styling as well as interior design. They will have creature comforts and relaxation areas that you would expect of a megayacht, too. For example, Nobiskrug Project 795 has an ample swim platform. Additionally, the owners and guests can enjoy a swim up on the sundeck. There, a pool spans the entire aft section of the deck. In close proximity, meanwhile, there’s a bar and a dining table. More alfresco relaxation and entertainment spaces occupy the main deck, as well as the fore and aft bridge deck.

Furthermore, the five decks of accommodation space will show off signature elements of the British design studio. Unfortunately, though, specifics are still remaining close to the build and design teams’ vests. One member of that team is Scott Wightman, the owner of MYB (Motor Yacht Build), a new-build and refit project-management company.