You are here: Home / Yachts / Motoryachts / Rossinavi’s Launch Polaris Is for Polar Conditions 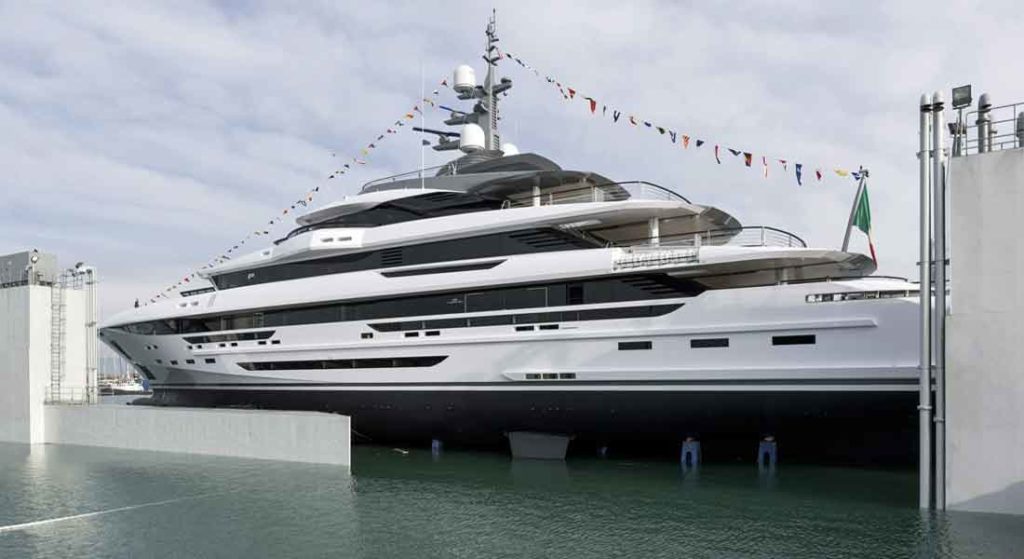 In looking at Polaris, you’d likely expect her to stick to warm-water cruising grounds that megayachts prefer. Interestingly, though, her looks are deceiving. Not only is she heading out into icy waters, but also Polaris is for polar conditions. In fact, her owner requested an unusual ice classification right from the very start.

Rossinavi launched the yacht, a.k.a. project King Shark, just last week in Italy. Federico Rossi, Rossinavi’s COO, says the owner made it clear that the steel-hulled yacht should be full displacement, have a bulbous bow, and feature diesel-electric propulsion. He also wanted azimuthing pods under the transom for maneuverability. But, Rossi continues, what really caught the yard’s attention was the requirement “Compliance to the Finnish/Swedish Ice Class Rules 2010 relevant to the ships in Class II.” This 230-foot (70.2-meter) luxury yacht needed to cruise safely in the Arctic and Antarctic, as well as in the Baltic Sea during the winter. “It became clear that the vessel had to be considered, operations-wise, as a ‘full-time/all-weather explorer,’ even in spite of her slender and aggressive outlook,” Rossi says.

Ensuring Polaris is for polar conditions, Rossinavi constructed her with beefed-up hull scantlings, with input from Arrabito Naval Architects. Additionally, the yard and naval architects concluded she needed features like heated sea chests and warm-water de-icing capabilities. Cruising-wise, the yacht should have a range of about 6,000 nautical miles at 12 knots in eco mode, employing one genset and one diesel engine. Traditional cruising speed with both diesel engines should be 15 knots. Her contractual top speed, meanwhile, is 17 knots.

The steel-hulled project is, of course, a yacht, with both styling and interior design by Enrico Gobbi – Team for Design. So, Polaris has plenty of creature comforts for her owner’s party of 12 to enjoy in their travels. For instance, an owner’s deck has a balcony, along with a waterfall feature. Yet another waterfall feature is inside the main saloon, with the water flowing over a backlit onyx wall. When the weather is warm, guests can swim in the 20-foot-long (6-meter-long) infinity pool on the main aft deck. Day or night, they can further enjoy a cinema on the main deck, plus a wellness area with a gym, a hammam, a massage room, and a yoga area. Plentiful watertoys are aboard, too, including a 33-foot (10-meter) limo tender custom built by Rossinavi.

As noteworthy as her systems and ice classification are, Polaris stands out for yet additional facts. For example, she complies with both RINA and Lloyd’s classification. And, she marks the largest launch to date by Rossinavi.

“After four years under construction, we are extremely proud to present this grand superyacht,” Rossi declares.