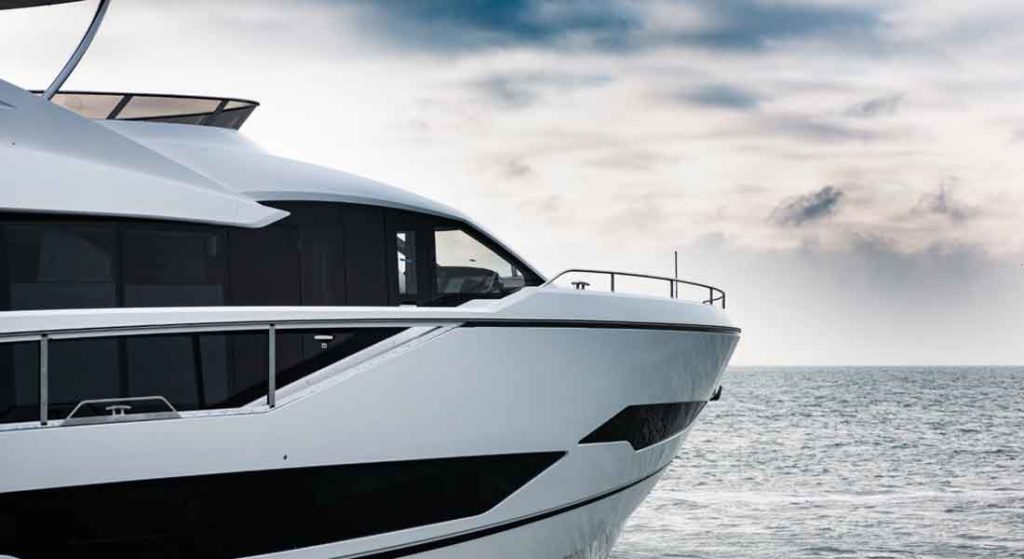 The skies may have been grey, and by all reports it was a bitterly cold January day. However, the first Sunseeker 90 Ocean sea trial, on the English Channel last week, also reportedly resulted in no issues.

The tests come two months after the megayacht rolled out of her build shed, revealing the new styling the shipyard will give to a series of large yachts in the coming months and years. The sporty nature of that styling pairs well with the intended performance. While the Sunseeker 90 Ocean sea trial figures haven’t been revealed, the shipyard engineered her for a top speed around 26 knots. At a somewhat more leisurely cruise speed, she still should have a good range of about 1,800 nautical miles, too.

While performance is a hallmark of Sunseeker yachts and megayachts, so, too, are the designs of leisure areas. The Sunseeker 90 Ocean surprises you with, according to the shipyard, four times the usual usable space at the waterline. The already-ample swim platform is deep enough to hold, say, a RIB and a PWC, or a combination of similar watertoys. Part of that platform lowers, for launching the tenders into the water easily. Then, the transom opens up in an unusual way to deliver the biggest surprise.

Specifically, it raises up, level with the aft deck, then unfolds outward, revealing built-in lounges. The lounges face the aft-deck seating area and become part of the conversation area, since the railing swings open. Even more versatile, however, the transom can remain flush in its original position, with the unfolding section (and therefore the lounges) opening up onto the swim platform. Add in a barbecue and flip-out swim steps, and the area becomes a welcoming way to spend the day.

Since the Sunseeker 90 Ocean sea trials have begun, expect completion within a few weeks.