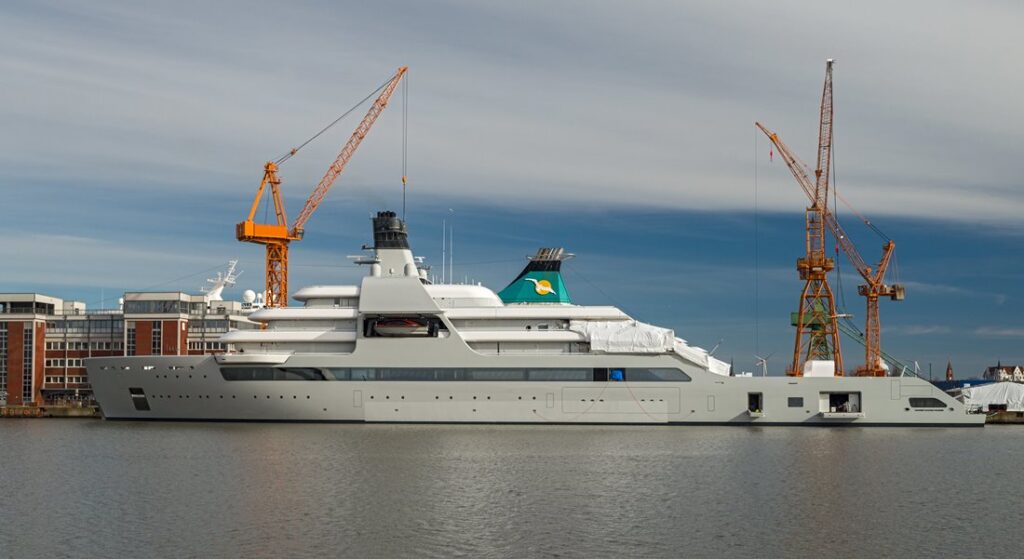 The largest (and, likely, last) private yacht from Lloyd Werft in Germany is marking the next major steps toward her delivery date. Seeing Solaris on sea trials recently has yacht watchers ready to add her to the list of the world’s largest private yachts.

Though the shipyard has been under a confidentiality agreement, others associated with the build have divulged details. For instance, construction started in 2016. While her LOA is still the subject of some debate, it seems to be between 456 and 459 feet (139 to 140 meters.) Still others say that the Marc Newson studio in London is responsible for the styling. Known as an industrial-design company, the studio made its first foray into nautical design with Riva, for an Aquariva model back in 2010.

Seeing Solaris on sea trials lets us in on a few of her special features. For example, and as you would expect of such a large craft, she has a helipad on one of her uppermost decks. Back on her main aft deck, meanwhile, a long pool will keep a large number of guests cool on warm days. For more private dips, of course, the best place to be is the circular hot tub tucked fully forward on her top deck. These all come in a package of eight total decks and a grey paint scheme.

Sadly, the yacht may be Lloyd Werft’s last. According to local media reports in Germany, the yard’s management team informed workers in February that it may shut down all operations at the end of the year. The global pandemic has hit the shipyard quite hard, since it specializes in cruise ships (although it did build the yacht Luna in 2010). Therefore, several contracts ended up canceling. If a buyer steps in to acquire the shipyard, however, jobs may remain at the 163-year-old company.