You are here: Home / Yachts / Motoryachts / Giorgio Armani and The Italian Sea Group Partner for Project 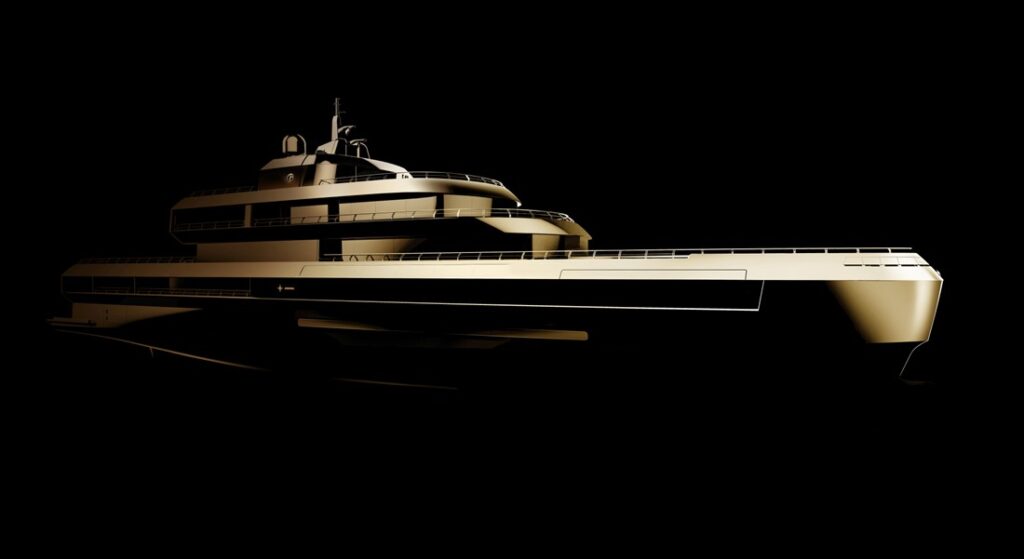 An ever-so-brief announcement has the global fashion and yachting industries eager to learn more. Giorgio Armani and The Italian Sea Group are collaborating on a new megayacht, set for delivery in about three years.

The shipyard group, which brings together the Admiral and Tecnomar brands of motoryachts, shared the news yesterday. It followed reports in a few Italian media, including the financial newspaper Milano Finanza. In fact, The Italian Sea Group refers visitors to that article on its website.

Unfortunately, the only public facts right now are the length of 236 feet (72 meters) and an anticipated delivery date in early 2024. In addition, the yard confirms that the megayacht will bear the Admiral brand. It further released the teaser image seen here.

While Armani and The Italian Sea Group have never built a yacht together, the famed fashion designer is no stranger to the yachting lifestyle. For instance, he proudly showed off the militaristic-styled, 213-foot (65-meter) Maín from Codecasa after her launch in 2008. Plenty of celebrities join him aboard for cruises, too. Prior to that project, he commissioned Mariu, a 164-footer (49.9-meter) from Codecasa as well. She saw delivery in 2003. Naturally, in both cases, Armani and his designers outfitted the interiors. Finally, in more recent years, his Armani Casa home décor and design company has teamed with Dynamiq to create interior packages for cruising customers.

The timing of the announcement involving Armani and The Italian Sea Group is noteworthy, too. Just last week, the company revealed the completion of a major expansion at its site in Marina di Carrara. It has a construction shed stretching 413 feet (126 meters) long, for megayachts to 262 feet (80 meters). The same shed accommodates dedicated workshops for craftspeople.

Additionally noteworthy, Armani and The Italian Sea Group may have more in the works. A statement from the founder and CEO of the group seems to indicate further hulls. “The new motoryachts, which combine technology and design with the distinctive features of Armani and its deep identity, will give us great satisfaction,” Giovanni Costantino says on the builder’s website.