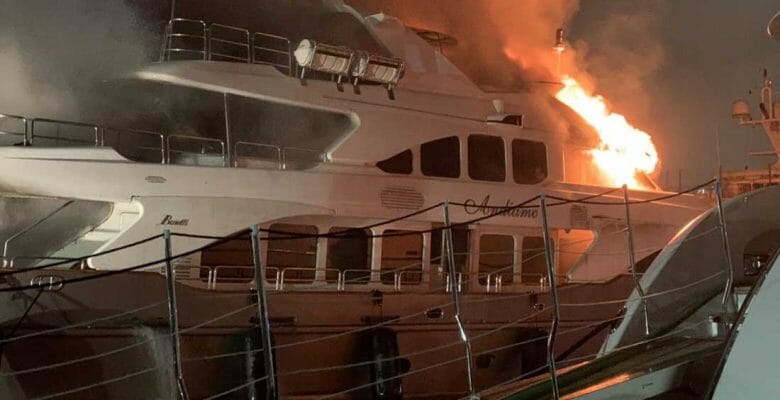 The National Transportation Safety Board (NTSB) has determined that unattended lit candles in a stateroom destroyed singer Marc Anthony’s yacht in 2019. The Andiamo fire worsened, the agency adds, due to the crew failing to complete repairs to the fire-detection and alarm system.

On December 18, 2019, the 120-foot (36.6-meter) Benetti caught fire while docked in Miami. Fire crews responded to the scene around 7:30 p.m., with more than 45 firefighters and about two hours needed to douse the flames. The fire stayed contained aboard the yacht, and no one reported injuries. Andiamo, however, capsized, sinking on her starboard side due to the firewater. Contrary to initial reports, adjacent yachts suffered heat and smoke damage. The marina’s power pedestal and dock floats suffered damage, too.

According to the NTSB report, that evening the six-person crew prepared for a guest of Anthony’s to arrive. Two crewmembers noticed the below-decks and saloon lighting wasn’t working. Since the lights were still inoperable when the guest arrived, a stew decided to light candles in the stateroom for him. The stew put the candles atop a wood dresser, directly beneath a port with two curtains. Both the crewmember and the guest then left the room for the skylounge.

A few minutes later, the stew noticed a plume of black smoke in the saloon. Two other crewmembers yelled “Fire!” which the captain heard. Upon entering the saloon, however, the captain couldn’t determine the fire’s cause. The captain further didn’t active the general alarm. Instead, he had the crew and guest evacuate, and instructed the crew to call for help. Since the flames became too intense, the crew couldn’t safely fight them.

While the investigation determined the candles were the Andiamo fire’s root cause, the crew’s failure to complete repairs contributed to its severity. Two months prior to the fire, Andiamo was undergoing ABS survey work when a surveyor documented the fire-detection and alarm sensors being inoperable. Despite several subsequent visits by ABS, including the day before the fire, the deficiencies remained. If the sensors had worked, the alarm system would have activated at the Andiamo fire’s start. The crew therefore likely would have been able to use fire-extinguishing equipment to suppress it.

“Given the dynamic environment of a vessel, candles can move, and their open flames can ignite combustible materials. The abundance of flammable materials on board can allow a fire to quickly spread out of control. Flashlights and battery-powered lighting are safer alternatives to use during a loss of electrical power.”

Anthony acquired the yacht in 2011. Construction originally took place in 2006.