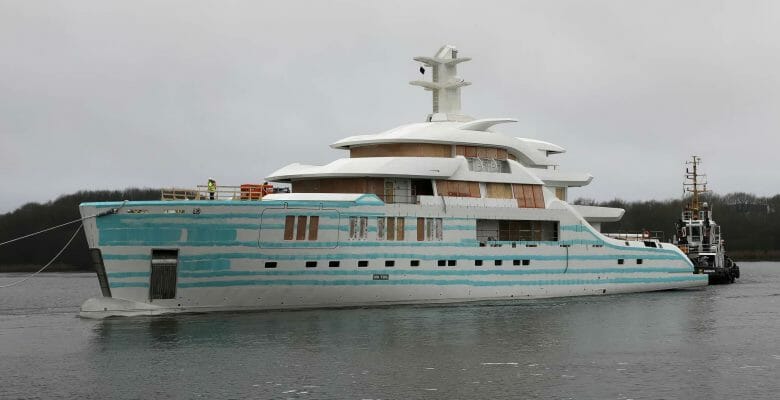 A five-deck 203-footer (62-meter) slipped out of her shed at Nobiskrug on Friday and began a steady journey to another builder’s facilities. Two tugs took Project 794 to Lürssen, for completion and delivery, when she will be known as the yacht Cap d’Ail.

Nobiskrug signed Project 794 in 2018, celebrating the keel laying in 2019. Yacht watchers got their first glimpse at the megayacht, particularly the styling by Espen Øino, in the summer of 2020. The shipyard previously had only revealed a sketch hinting at some of her lines.

Similarly, the yacht Cap d’Ail has remained mostly under tight wraps in terms of her interior-design details and other amenities. For instance, she has a lap pool measuring about 23 feet (7 meters) long. Additionally, it has glass walls, and is within a wellness area. The lounges and other relaxation and social areas throughout the yacht reportedly follow an open-plan arrangement as well.

Also noteworthy, Nobiskrug had characterized the superyacht as being “performance-driven.” It didn’t disclosed expected speeds or other performance-related data, however. Neither has Lürssen, which thus far has only confirmed the name and that the yacht Cap d’Ail will reach completion at its shipyard.

We reached out to Imperial Yachts, serving as the owner’s representative and construction supervisor, for comment. It confirmed that it will continue its duties.