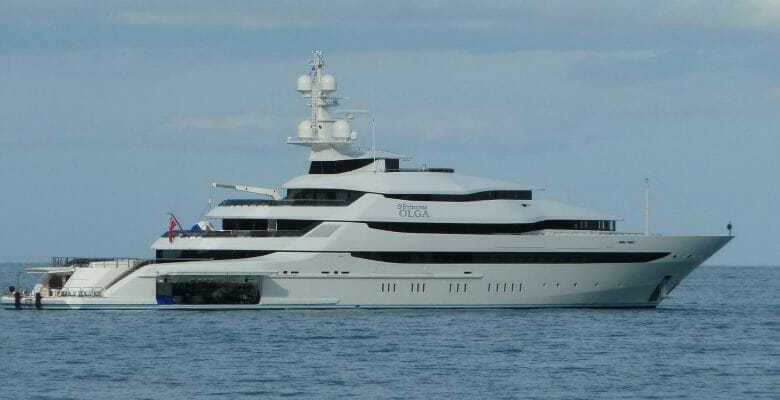 UPDATE, SEPTEMBER 22, 2022: Dilbar transferred under tow from Hamburg to Bremen, Germany overnight. This does not change the fact that Dilbar is arrested, however, by the German government. Rather, Lürssen has transferred her from the drydock where she has been since last year, with government authority permission. Reportedly, according to local German media, the reason is to free up service space.

In April, German officials confirmed that they had “impounded” Dilbar. (pictured below, in Barcelona in 2016). The move comes the day after the Bundeskriminalamt, Germany’s federal investigative police unit, and the European Union (EU) determined that the owner of Dilbar is Gulbakhor Ismailova. She is the sister of Alisher Usmanov, who was the widely reported owner. The EU says Usmanov transferred ownership of Dilbar, among other assets, indirectly to her, through a series of corporations. Ismailova landed on the EU sanctions list, effective April 8, due to her close ties to Usmanov. The United Kingdom further added her to its sanctions list yesterday, subjecting her to an asset freeze and travel ban.

Read on beneath the photo for our original article.

In what appears to be the first sanctions-related yacht arrest stemming from the Russian invasion of Ukraine, the seizure of Amore Vero took place in the early hours of this morning. Despite published news media reporting Dilbar is arrested, too, she is not detained as of this writing.

The 281-foot (85.6-meter) Amore Vero, the ex-St. Princess Olga (at top) from Oceanco, has been in La Ciotat for work since January. French customs officials issued a statement confirming the seizure. They further detailed what occurred just prior. Specifically, they indicate they seized her “after an inspection lasting several hours” overnight from yesterday to today. Additionally, the statement alleges that the crew was hurrying to depart, “without having completed the planned work.”

The same customs officials identify her primary stakeholder as Igor Sechin, the CEO of the Russian state petroleum company. Previously, Sechin served as a deputy head of Russian president Vladimir Putin’s administration. The European Union added Sechin to a list of sanctioned individuals on February 28.

In related news, Forbes first reported yesterday that Dilbar is arrested in Germany, by German authorities, citing three unnamed sources. The article alleged that the arrest took place in Hamburg, at Blohm+Voss—which has belonged to Lürssen since 2016. It uses the facility for refit and repair of yachts, commercial vessels, and naval ships. The 512-foot (156-meter) Dilbar, built by Lürssen in 2016, has been undergoing a refit there since last fall, in fact. Additional media outlets picked up the story, referencing Forbes.

However, despite the European Union freezing her owner’s assets on February 28, the superyacht is not under arrest or government detention. A source close to the yacht confirmed this to us this morning, and The Guardian newspaper quotes a spokesperson for Hamburg’s economic authority as denying the arrest. Interestingly, that same spokesperson adds, while officials do not plan to hand the yacht to her owner, “No yacht is going to leave the port that is not allowed to do so.” When we contacted the shipyard, it declined to comment on the situation, but did say that it treats all orders and projects in accordance with applicable laws and regulations. Forbes has subsequently retracted and rewritten the article.

Dilbar’s owner, Alisher Usmanov, has holdings in steel, mining, consumer electronics, and more. The European Union characterizes him as “one of Russia’s businessmen-officials,” servicing monetary flows in accordance with the Russian president’s will.