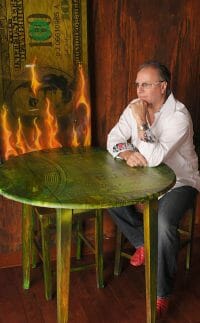 When asked how many colors exist, some people will count off the familiar ROY G BIV acronym (for red, orange, yellow, green, blue, indigo, violet). Ask Dean Loucks (left), however, and he’ll tell you there are at least 769.

That’s the number of custom colors he developed, with a paint company, that are being used on some of the fastest speedboats around – as well as motorcycles, helicopters, private planes, and even an Indy racecar. He’s now bringing that same concept to the megayacht market, for everything from the toys they tote to the yachts themselves. But don’t think his designs are just riots of bold colors. They’re cool, and classy. Loucks employs intricate techniques to give the illusion of depth, layered shapes that reveal themselves at just the right angle and lighting, and flake effects that make the paint sparkle brilliantly with even more intensity of color.

Born and raised in Indiana, Loucks jokes that his artistic talents were far greater than his spelling abilities at a young age. As proof, he showed me a drawing he did at age eight, in which his self-portrait, in front of a drawing board, is accompanied by, “When I grow up I would like to be a artist. Because I like to droll.” After high school, he moved to Southern California and met with great success selling custom airbrushed clothing, simultaneously landing illustration work with car-show clients and even Disney. But after a few years, he missed the Midwest, so he moved back to Indiana to embark on new ways to employ airbrushing and other techniques.

Much of the 1990s was spent honing his craft and growing his business. By 1997, offshore racing and pleasureboats were becoming some of his biggest clients, with Cigarette Racing Team, Formula Boats, and Outerlimits among them. In fact, last year he customized Man of Steel, a 50-foot Outerlimits owned by the same person who has the 164-foot Heesen Man of Steel. If you’re familiar with the megayacht, then you know the “Z” emblem, much like that of Superman, adorning the yacht. Loucks emblazoned the same emblem on the powerboat (below), with brilliant tones like red.

Loucks and his business partner, a fellow paint expert, do most of their work in a 15,000-square-foot building, but with the global nature of the yacht business, he’s “working” the docks at events like the recent Yacht & Brokerage Show in Miami. Through those efforts, as well as leveraging existing relationships with helicopter manufacturers, he’s making inroads with superyacht builders, designers, and owners. He’s being asked to present everything from simple stripes that flow gracefully down and forward to the bow, to layered curls and swirls that reveal themselves only as you get closer to the yacht. Then there are circles and other shapes that subtly emerge from a subdued color, only to equally subtly fade down the expanse of the hull.

One of the tag lines of Loucke’s company, The Art of Design, is, “Can you handle the attention?” It’s closely related to a favored saying of his, about how his designs are intended to “steal time.” The points: A one-of-a-kind paint job makes a yacht stand apart, and the visual stimulation will make onlookers take second looks and the time to consider what’s involved. He’s additionally leveraging his relationships with leading helicopter companies to reach their customers who also own yachts. Loucke has customized helicopters to match an owner’s other craft as well as feature designs all their own. One particular helicopter that he painted for a client has simple, classic customization: one or two colors of stripes flowing front to back. Another has wild, barbed-wire designs enveloping the body. 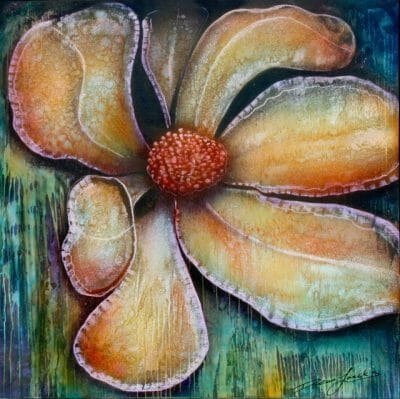 The yachts and their toys aren’t the only things that Loucks paints. Last year he launched the Dean Loucks Fine Art Collection, comprising paintings like the one above (titled “Sad Lilly”) that hang in galleries, hotels, and fine homes—and, he soon expects, megayachts. They embrace the same layering of colors and distinctive techniques as his other work, to give “life” to the painting. He’s painted everything from a jazz musician, whose saxophone seems to leap off the canvas, to martini glasses.

Loucks is poised to leap further into the megayacht market. Stay tuned. In the meantime, here’s more of his airbrush artistry.