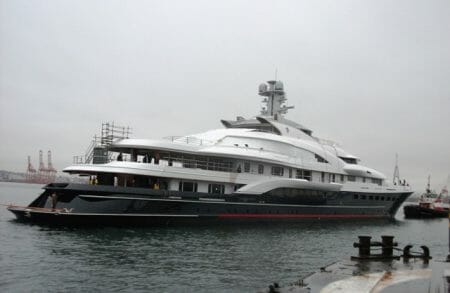 It may have been a dreary grey day, but spirits were high when Attessa IV slipped into the waters outside of Vancouver Shipyards a few days ago.

The photos here come courtesy of Capt. Ted McCumber, under whose charge Attessa IV has been since construction began. Even though the project is technically a refit, she’s more akin to a rebuild, because an extreme amount of work has gone into this super-size superyacht thus far, and will continue to be performed until hand-over occurs. The yacht started life as Evergreen, launched in 1997 as a 302-footer (92.14 meters) at Hayashikane in Japan. McCumber’s boss, the American businessman and yachtsman Dennis Washington, purchased her in 2007. As he’s done with previous yacht projects, his Washington Yachting Group has been handling the transformation. 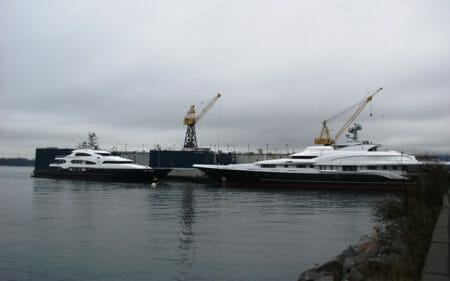 Attessa IV now measures 332 feet, a length put into better perspective in the photo above. That’s Attessa III to the left, looking pretty much dwarfed by her new big sister. Considering that Attessa III is no slouch herself, at 225 feet, it’s incredible to see.

There’s still a few more months of work to be completed. On the to-do list are accommodations for 16 (including the owners) and 25 crew, a private cinema, and a spa area that further features a beauty salon, massage room, steam room, sauna, and gym. In addition, McCumber says the skylounge will be “amazing,” featuring a blown glass chandelier created by the famed glass artist Dale Chihuly.