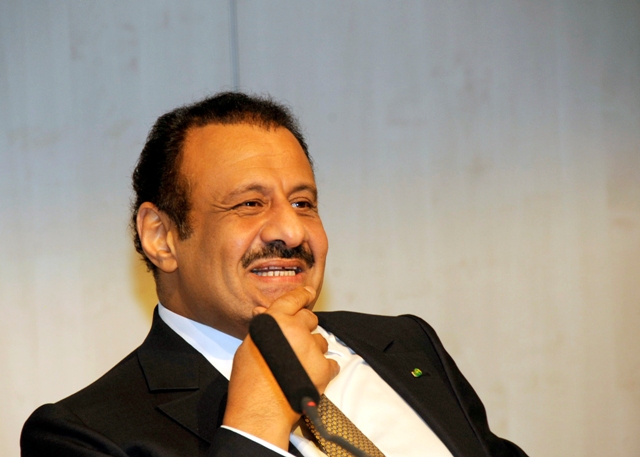 Q: A primary focus of the Living Oceans Foundation is coral reef research. Why?

A: The world’s coral reefs are in crisis. These natural wonders that occupy only a fraction of one percent of the marine environment are considered to be the most endangered aquatic ecosystems on earth. Approximately 30 million of the world’s poorest people depend entirely on coral reefs for food and income, and the estimated total annual value of products and services provided by coral reefs globally is US $375 billion. Beyond the tangible products and services that reefs provide, these beautiful ecosystems harbor an invaluable array of natural biodiversity, the loss of which will be tragic to our descendants and jeopardize the overall health of our planet. By some estimates, 20 percent of the world’s coral reefs have been lost in just the past few decades. Another 15 percent or so are seriously threatened and may be lost within the next 10 to 20 years. These are alarming statistics, and the Living Oceans Foundation is dedicating the majority of our efforts to accelerate scientific knowledge and to assist resource managers who are actively engaged in conservation activities.

Q: You are an accomplished diver. Do you ever join the scientists and researchers you host aboard your vessels on their dive trips?

A: I enjoy it very much to scuba dive with the scientists during research missions, and I join them whenever I get an opportunity. From 2006 to 2009, the Living Oceans Foundation conducted four major research expeditions in my home waters of the Red Sea. This was a very successful research program, and I am proud to say that the Living Oceans Foundation has vastly advanced the scientific knowledge of Saudi Arabian coral reefs. Another benefit was that, since the research was close to my home, I was able to dive with the scientists for a short time during each of those expeditions. It gives me great pleasure to be able to interact with, and observe, the scientists at work and to share in their passion for preserving these valuable ecosystems. Diving on coral reefs is an amazing experience. Where else can you get so close to wild nature and personally observe such interesting creatures at close range? Humans are so foreign in the marine environment that even the biggest marine animals are unafraid and let us swim among them. Instead of preying on their lack of human fear, we should respect and protect all life in our seas. 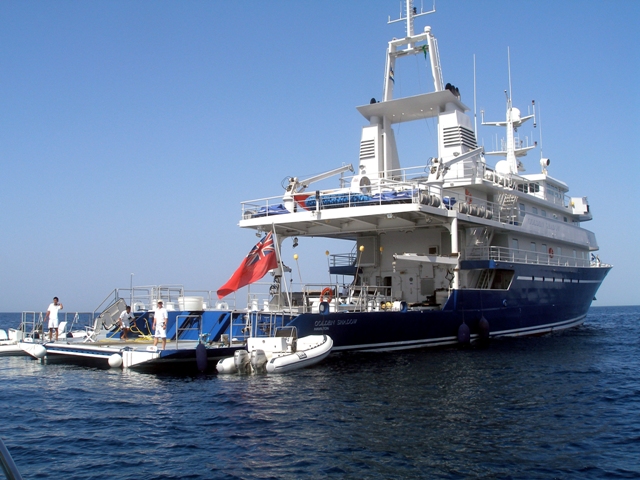 Q: Your Golden Fleet is outfitted with high-tech tools and systems to assist scientists and researchers in their efforts. What are some of the items they most appreciate?

A: One of most unique assets aboard the Golden Shadow is an elevator at the stern of the ship that can lift 12 tons of weight. It was designed to recover and deploy a Cessna Caravan floatplane. The aircraft conducts a water landing then cuts its engine and glides into the elevator well. Then the elevator lifts the aircraft onto the deck of the ship for stowage. The Living Oceans Foundation has used this aircraft for remote sensing operations. A sophisticated sensor is mounted on the aircraft to create high-resolution habitat maps of coral reef ecosystems. The elevator is also used to launch and recover a 36-foot catamaran to support all of the research divers. Additionally, the ship has a well-equipped laboratory and a decompression chamber if ever a diver is stricken with decompression sickness. Fortunately, it’s never had to be used, but we keep it in top operating condition just in case. Safety is a very high priority during all of our operations. Shipboard duty and diving operations are inherently dangerous activities, and we’re proud of our safety record. The Golden Shadow can support up to 24 embarked scientists on one deck of the ship. That is in addition to up to 24 crewmen for a total ship capacity of 48 people. Finally, I would like to emphasize that the Golden Shadow is a full ocean-capable vessel with an impressive endurance for supporting research in the most inaccessible places around the world.

Q: This year, you’re embarking on a long-term exploration of coral reefs around the world. What are the regions you’ll visit, and what do you hope to learn?

A: We are very excited to have recently embarked on a five-year Global Reef Expedition. This is a dream come true for me. We have been planning this ambitious program over the past four years. I’m sure you can appreciate the immensity of effort required to plan and prepare for a program of this scale. The first research project on the Global Reef Expedition itinerary just began on the 27th of April, 2011, in an area known as Cay Sal Bank, Bahamas. The Golden Fleet will travel from east to west around the world. We’ll focus on coral reef research in the Caribbean Sea for the next year, researching numerous remote sites in the Bahamas, St Kitts/Nevis, Jamaica, and Colombia. Once we’ve completed that work, the ships will transit the Panama Canal to begin work in the Pacific Ocean. The first major research work in the Pacific will take place in French Polynesia. Researchers worked aboard the Golden Shadow in French Polynesia in the late 1990’s before the Living Oceans Foundation was even formally established. It will be scientifically interesting to observe the changes that have occurred these past dozen years. Eventually we’ll make our way to the coral triangle. Located in waters off the coasts of Indonesia, Malaysia, Papua New Guinea, the Philippines, Solomon Islands and Timor-Leste, the Coral Triangle covers almost 1.6 billion acres – an area about half the size of the United States. This region is home to 3,000 species of fish and nearly 500 reef-building coral species (75 percent of all known coral species), while its shores provide nesting grounds for six of the world’s seven species of sea turtles. Following research in the Coral Triangle, we’ll proceed to the Indian Ocean, and then towards the end of the five year program we’ll return to the Red Sea, where the Foundation has recently completed a four-year program of mapping and surveying the rich coral reef ecosystems along my coast of Saudi Arabia. 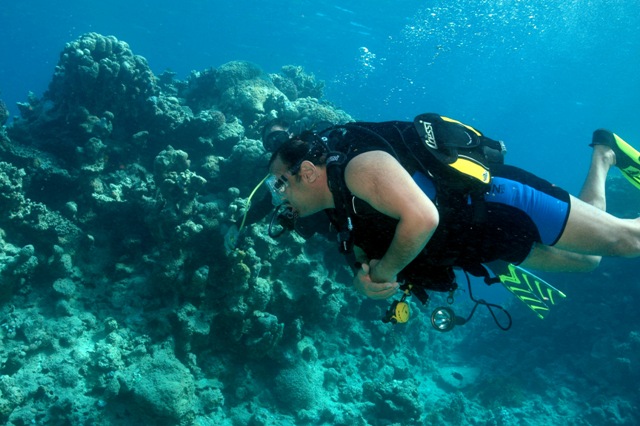 Q: Ultimately, what can all of us learn about the marine habitat thanks to the research completed to date?

A: The research being conducted on the Global Reef Expedition is focused on conducting baseline surveys of the coral reef environments, creating high-resolution habitat maps of the seafloor, and assessing the health, threats, and resilience of global coral reefs. We conduct applied scientific research aligned with the information needs of coral reef resource managers in each country and region we will be visiting. This is a very different approach than the academic world takes. Universities are primarily interested in answering basic scientific questions and proving hypotheses. We have the freedom, resources, and motivation to conduct applied science to assess and characterize these coral reef ecosystems on large scales in order to provide resource managers and governments with the scientific knowledge needed to enact new policies, establish Marine Protected Areas (MPA), establish coastal zone management systems, etc. That’s our niche and our value-added to conservation efforts. With the coral reef crisis unfolding at a rapid pace before our eyes, time cannot be wasted. We must actively manage these valuable resources to ensure sustainability for the long term. The days of senseless over-exploitation of marine resources needs to end quickly, and we need to live in harmony with the ocean. We now realize how important ocean health is to the planet and human health, and it’s time we harness our collective resources to ensure that our environmental health is sustainable for generations to come. I believe in the concept of “generational equity.” That concept is based on the fairness doctrine applied to subsequent generations so they receive the environment in the same or better condition than the generation before them. When you think of the effort we put into raising our children, ensuring they have the best opportunity possible for schools, that their health is looked after, and that they make good decisions. At the same time, we’re not doing the best job in looking after the environment that our children will adopt. All of the efforts we put into raising our offspring will be in vain if we leave them with an inheritance of a degraded earth and depleted natural resources. That’s why I am supporting the Living Oceans Foundation and why we have begun this ambitious Global Reef Expedition. What better reason could there be?