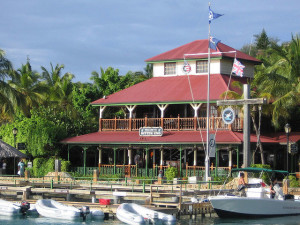 The Bitter End Yacht Club, long a favorite megayacht destination in the British Virgin Islands, now has new slips and a better overall layout at its Quarterdeck Marina.

“The previous facility was certainly more than sufficient and fit our needs in the 80s, 90s, and until recently,” Dana Hokin, the owner and managing director for Bitter End Yacht Club, explains. So, just after Easter, the existing docks were removed to make way for the new facilities, “built from the ground up,” she adds.

Officially opened in July, the new Quarterdeck Marina accommodates 18 yachts, including eight megayachts to 150 feet. In addition, the L dock was expanded to allow four megayachts to 235 feet LOA to dock, alongside two smaller boats. To ensure their related structures would be in keeping with the look of the older buildings, the Bitter End Yacht Club tapped Peter Brill, the same architect who designed the resort more than 30 years ago.

Other highlights of the marina renovations:

Even with the changes, the Bitter End Yacht Club retains the boutique-like feel that it has offered since Myron Hokin, an avid sailor (and the grandfather of Dana Hokin), acquired the property in the 1970s and turned it into a family-run resort.