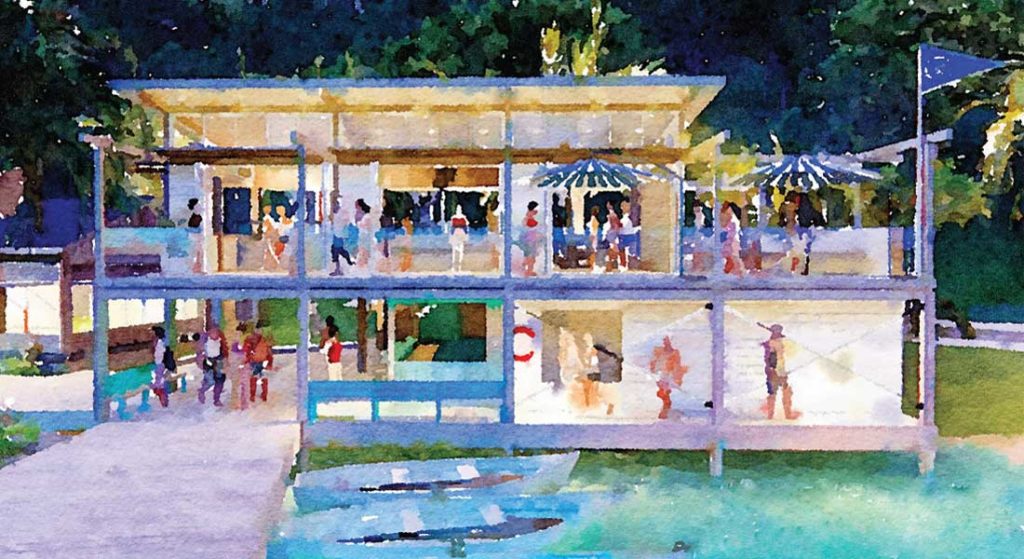 For the past several weeks, construction equipment that previously was removing debris has instead been digging foundations. The well-known Bitter End Yacht Club in the British Virgin Islands is finally able to reconstruct its infrastructure. In addition, it anticipates reopening in October.

Calling the reconstruction BEYC 2.0, the resort and marina team has been active on social media, sharing photos of the progress since Hurricane Irma destroyed it in September 2019. Soon after that storm, Hurricane Maria swept through the region, too. The latest positive news, shared this week, includes the video below. The team additionally has been sharing glimpses of the future. These include the illustration at top, the reimagining of the Bitter End’s Quarterdeck Marina.

Footings & foundations. They are among the initial steps in the actual physical construction process. This video and these photos are but the first glimpses of the future buildings at BEYC. Stay tuned for many to come. #BringBackBitterEnd #footings #foundations #BEYC #BVI pic.twitter.com/9AQgcZjiAX

While the look of the Quarterdeck Marina is quite different than it was from its founding in 1973, the purpose remains the same. The building will be two stories, with a members lounge, restaurant, beach bar, provisioning market, retail shop, and watersports center. In fact, the market will feature fresh produce and fish for boat and yacht owners who prefer cooking onboard. In addition, you’ll find gourmet foods, wines, liquors, as well as cookies and pastries from the longtime Bitter End Yacht Club chef, Winston Butler.

While the BEYC 2.0 creation effort has been underway, the resort owners and staff have been active in the overall restoration of the region. With the support of longtime customers, the team has raised more than $900,000 for projects benefitting Virgin Gorda’s recovery. Funds are further going toward a yearlong program that is cleaning up the shorelines and seabeds of North Sound and Eustatia Sound.

It’s a daunting task to restore 64 acres of property and a mile of waterfront. However, from the early restoration operations emanating from the motoryacht Barnacle to the more recent concrete foundation pourings, the Bitter End Yacht Club staff remains focused on the fall heralding a triumphant return.