You are here: Home / Yachts / Motoryachts / The Sinking of Yogi: Stop the Speculation 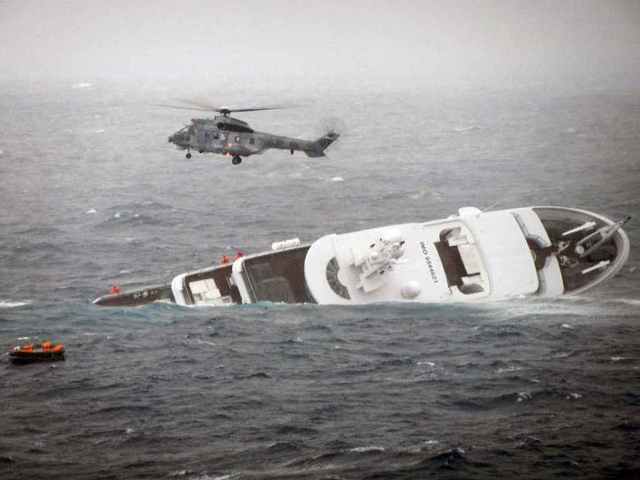 Last Friday news spread quickly about the sinking of Yogi, a sudden incident in Greece. Dozens of websites both within and outside of the yachting industry have been reporting the news since then. Unfortunately, incorrect reports have been published and assumptions have been made. In this editor’s opinion, the speculation needs to stop—now.

First, the facts according to the Hellenic Coast Guard. The 204-foot (60.2-meter) Yogi was 19 nautical miles off Skyros, Greece, early Friday morning when the captain contacted them. He reported that Yogi suffered mechanical failure, was unmanageable due to weather conditions, and was flooding. Eight individuals, all crew and including him, were aboard. Weather conditions were Force 8, a gale with winds between 34 and 40 knots and seas of 18 to 25 feet (5.5 to 7.5 meters). Two rescue helicopters  dispatched, as did further Coast Guard vessels. A Navy frigate and four commercial vessels responded, too. Coast Guard video shows all eight people were in survival suits on an upper deck when rescue operations began. Additionally, it shows Yogi was on her starboard side. It took a little over an hour to safely get everyone off the yacht. Coast Guard personnel then took them ashore for medical evaluation.

Another fact comes from Proteksan Turquoise, which delivered Yogi in 2011. The yacht was at its yard in Turkey just prior to the accident for warranty repaint work. (Some news reports indicate the warranty work involved the interior.)

Last fact, at this point: The cause for the sinking of Yogi remains under investigation.

Naturally, whenever an event such as a superyacht sinking occurs, speculation occurs. Unfortunately, some yachting industry representatives have gone on the record, questioning the construction and even the crew. Are these valid questions? Without first-hand knowledge of the build or the accident, publicly pointing fingers sheds no light on the situation. Equally disconcerting, some media have taken a misguided attempt at humor and/or to attract higher readership. “Superyacht Sinks Like a Stone in the Mediterranean” reads one headline. Worse, another journalist, commenting on the charter rates, writes, “regarding the lower price, could it be the extra $28,000 for the option of keeping the boat upright throughout the voyage?”

Interestingly, that statement remained online for three days. She pulled it yesterday afternoon, after two people, including me, took her to task for being out of line. She replied to me, saying I’d made a good point. Yet, she gave a puzzling explanation for her original comment. “The shock that these supposedly new, modern, big ships and yachts are still so frail in the face of the sea – and that no amount of money can buy safety – was my point and not well made.”

Since the causes of the mechanical failure and flooding are still unknown, we’d all do well to await the investigation’s results. Proteksan Turquoise’s representatives, as well as the insurer and others, are speaking with the captain and crew.

Furthermore, we would all do well to simply thank the Hellenic Coast Guard and the other vessel operators for responding so professionally to the sinking of Yogi. Without them, this tragedy would be far more unthinkable.

“We have now consulted with all the relevant stakeholders involved in the building and operation of the yacht.

“We have also conducted our own internal inquiry into the sinking, including analyzing the yacht’s naval architecture, the construction methods and techniques employed by us in building the yacht.

“Proteksan-Turquoise is firmly of the opinion that the sinking is not attributable to anything  structural or technical which would have compromised her seaworthiness.

“Proteksan-Turquoise would like to stress again the point that M/Y YOGI, whose construction and outfitting was surveyed and certified by the American Bureau of Shipping, was built to be MCA Large Yacht (LY2) compliant and was surveyed and approved by the French flag authorities.

“Unless there are material developments, no further updates will be released.”