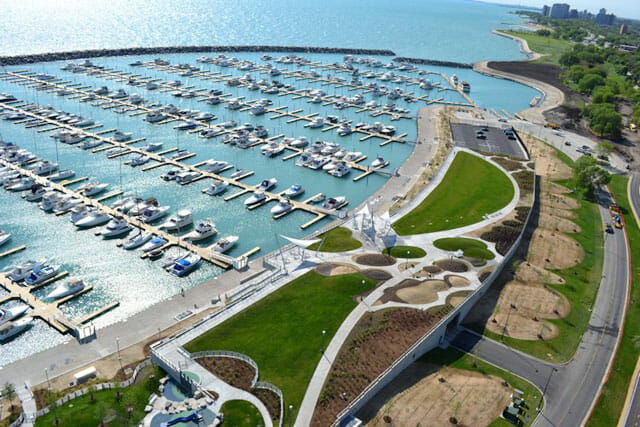 Able to accommodate yachts and megayachts to 200 feet, the 31st Street Harbor has the amenities owners and crew want, including a fuel dock. It’s also in a good location, about a mile south of Soldier Field, where the NFL’s Chicago Bears play. But it’s also eco-friendly, which garnered it the Fabien Cousteau Blue Award. That award is given to individuals and/or companies striving to protect the marine environment. For example, the public parking garage at the marina is topped by a 63,000-square-foot “green” roof. It resembles a landscaped hill and employs only native plants. It further reduces storm-water runoff. The interior of the garage is heated and cooled via water from Lake Michigan.

Another reason the 31st Street Harbor received the Fabien Cousteau Blue Award: its breakwater. Constructed of massive boulders (some being as heavy as 18 tons), it’s intended to protect yachts and boats inside the confines from waves up to 35 feet. If you doubt anything that powerful can hit Lake Michigan, think again. When the center of Superstorm Sandy was 600 miles away, the outer bands whipped up 20-foot-high waves in the middle of the lake.

Collectively, all of the eco-minded 31st Street Harbor amenities were designed to achieve LEED Silver certification at a minimum. Gold certification is anticipated. That, too, weighed in the decision to grant the Fabien Cousteau Blue Award.

Here’s a closer look at the marina, including how it was built.