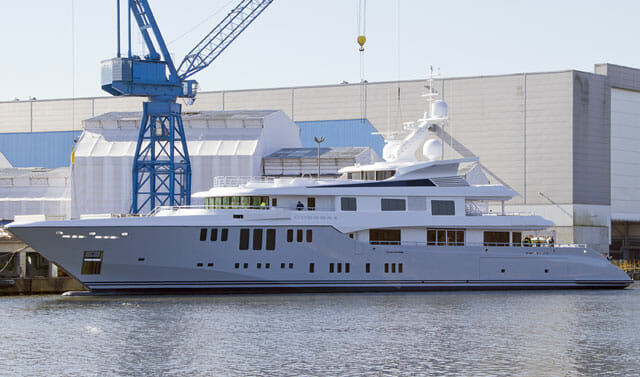 UPDATE, OCTOBER 21, 2013: Over the weekend, Odessa II departed Rendsberg, Germany, home to Nobiskrug. She headed straight to the UK and is currently causing quite a stir in London, where she arrived today.

UPDATE, MAY 21, 2013: Nobiskrug has revealed the LOA of Odessa II to be 239’10” (73.15 meters). In addition, Haynes-Roberts, a New York-based company specializing in luxurious residences, collaborated with H2 Yacht Design for the interior. H2 Yacht Design also worked with Nobiskrug on styling. Focus Yacht Design did not contribute to the styling, as initially reported.

the original story from April 2013 follows:

Here’s your first look at Odessa II, a nearly 240-footer that will be delivered by Nobiskrug in a few weeks.

Odessa II was initially part of a five-megayacht order commissioned prior to the global economic crisis. All were to be built at the shipyard formerly known as HDW (now part of Abu Dhabi Mar) in Kiel, Germany. When the economy slumped, however, three of the yachts were cancelled. The two remaining megayachts were kept pretty confidential, known simply by their project names, HDW 422 and HDW 423. HDW 422 became Plan B, which launched last year. HDW 423 is Odessa II.

Being part of a multi-yacht order isn’t the only thing that Odessa II has in common with Plan B. The two share similar LOAs, for one. Plan B measures 239’5″ (73 meters), and we, as well as other media outlets, initially believed that Odessa II would be the same, though her AIS signal indicates it’s 236’2″ (72 meters). The beams are identical, however, at 39’4” (12 meters). The two yachts further share styling by Focus Yacht Design. And, both were moved to Nobiskrug for completion after being floated out of the build sheds in Kiel.

As for other facts about Odessa II, not much is known. She features interior design by H2 Yacht Design. The project is for a repeat client and will emphasize family voyages for 12 in the owner’s party.