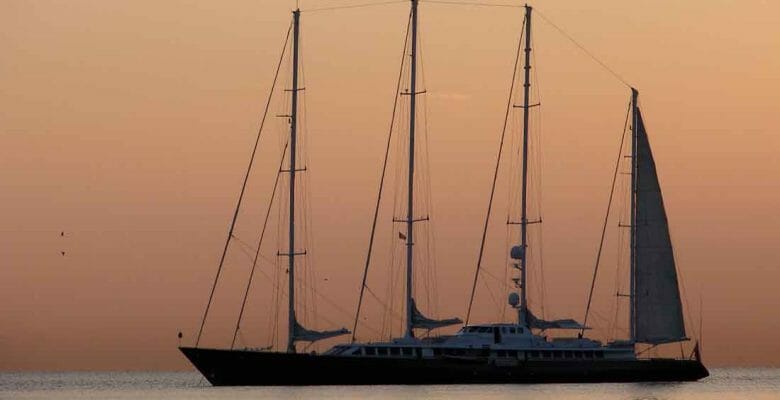 Enigma, a sailing superyacht that gained renowned as Phocea, broke out in flames while anchored off Malaysia yesterday. While it took hours to extinguish, and the yacht subsequently sank, no one onboard sustained injuries.

According to the Malaysian Coast Guard, a call reporting the fire came in around 8:20 a.m. Malaysian time. The 246-foot (75-meter) Enigma was anchored off Langkawi. Personnel from the Coast Guard, along with fire and rescue teams, all responded. The seven crewmembers aboard the sailing superyacht were all rescued, unharmed. In the video below, produced by the Coast Guard, one crewmember relays the tense minutes while he and his fellow crewmembers waited for the ships to arrive. (The dialogue is in Malaysian.) Additionally, you can see the severe damage that the fire did to the yacht.

The emergency-response teams were able to put out the fire toward the late afternoon. However, strong winds made the effort challenging. Because of those winds, the emergency crews remained on site until well into the evening, concerned about the flames reigniting and spreading. Environmental teams were on hand, too. Thankfully, no fuel spilled as a result of the fire.

Malaysian authorities did not report subsequent issues with the fire, or with the yacht, on the 18th. But, the extensive damage to the yacht was too great for her to withstand, and sometime this morning Malaysian time she sank. Photos circulating on social media reveal her submerged partly up her masts. The cause of the fire remains under investigation.

The four-masted Enigma dates back to 1976. Originally, she bore the name Club Méditerranée and belonged to Alain Colas, a famed single-handed sailor. Ensuing ownership changes and refits saw her converted for use as a charter yacht. The first major transformation took place from 1983 to 1986. Of course, new interior design and styling features came aboard. Among her most famous later owners: Mouna Ayoub, a Lebanese-born French businesswoman and socialite. She acquired the yacht in 1997, which then bore the name Phocea. Lürssen handled the refit for Ayoub. The yacht remains one of the world’s largest sailing superyachts.