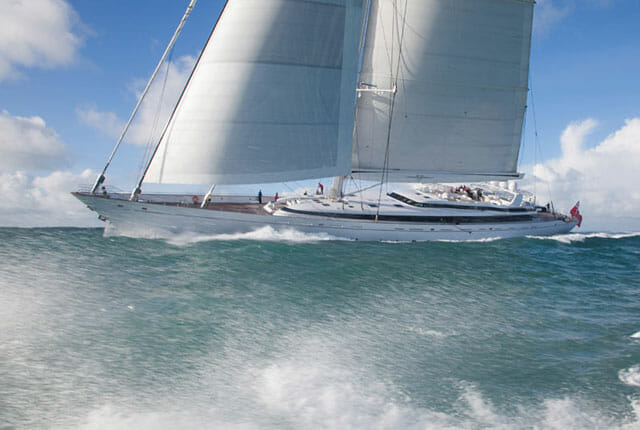 After a two-year refit, M5, formerly Mirabella V, has departed Pendennis for what’s expected to be a number of global adventures.

M5 is pictured here on sea trials a few weeks ago. At press time, she was headed to the southern Atlantic Ocean for cruising. Pacific Ocean ports are also on her itinerary.

What was initially planned as a year-long refit was extended to ensure that M5 would be the fully restyled sailing superyacht that her owners envisioned. The owners tapped the yacht’s original naval architect, Ron Holland, to pen her new looks. M5 arrived at Pendennis’ Pendennis Plus refit facility in March 2012. Among the first tasks were lengthening her and changing her transom design. Completed in late 2012, M5 was made to measure 255’9” (78 meters), compared to her original 247 feet (72.5 meters). Much of the work took place at Pendennis’ facility, though some needed to be started elsewhere. In fact, Green Marine was tapped to manufacture the new transom. It didn’t simply add to M5’s LOA, it gave the yacht an entirely new look. It was also manufactured of composite, while the rest of M5 is aluminum. (To see the before and after looks up close, check out the images in our November 2012 article “Sailing Yacht M5 Refit Halfway Done at Pendennis.”) 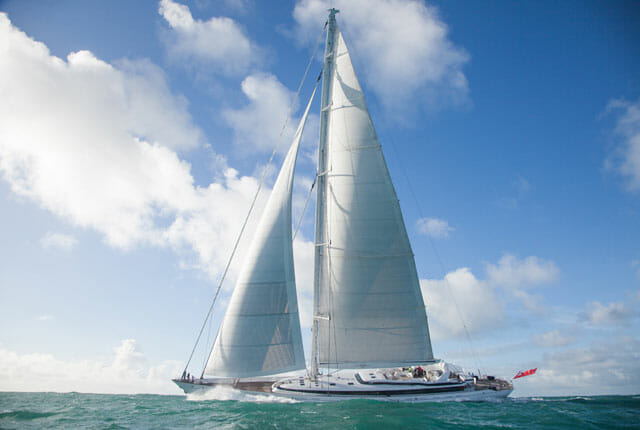 In October 2013, the megayacht’s newly reconstructed, 291’10” (89-meter) mast was stepped, at the famed Falmouth Docks. It was rebuilt using carbon fiber and titanium for the rig and fittings. That reduced weight to about 27 tons, compared to 45 originally. Pendennis also estimates it’s about 30 percent stronger.

M5 was completely re-imagined inside, too. The owners worked with Redman Whiteley Dixon to create a look evocative of the Art Deco era. It’s interesting to note that the initial idea was to give M5 a contemporary decor. All of the original wood paneling and other interior elements were stripped to allow for the new accommodations for 16 guests. We don’t have images at present but hope to in the coming weeks. The new spaces complement a much larger flying bridge, with more relaxation space than Mirabella V had. There’s alfresco dining, sunning, and seating.

Capt. Rocka Romcke, who oversaw the transformation of M5, says the owners are delighted with how the sailing superyacht turned out. “We are all incredibly proud of our involvement in and management of the extensive refit on M5,” he says. “Working together with all of our key project partners, we have given M5 a new lease of life and prepared her for her next adventure.”