You are here: Home / Yachts / Motoryachts / Equanimity, a.k.a. Y709, Handed Over by Oceanco 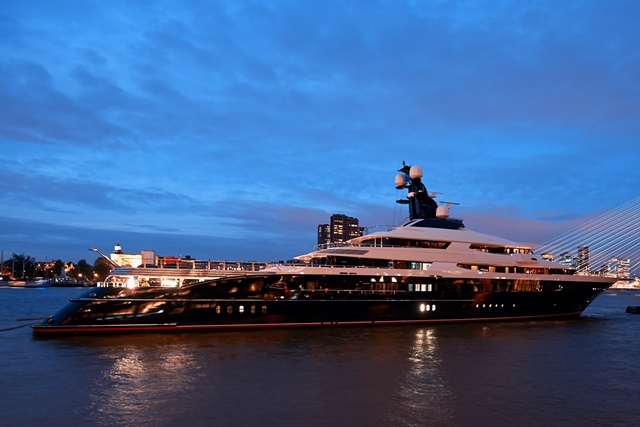 Equanimity means a tranquil state of mind and even of physical being, calm and balanced. In Buddhism, equanimity is one of the four great virtues that Buddha taught. In the megayacht world, Equanimity is the newest Oceanco handed over, to an owner originally from China. The 300’2” (91.5-meter) megayacht is also the first ever to fully comply with the Passenger Yacht Code (PYC).

Equanimity was known as Y709 during construction. She was also referred to as PA164. Naval architecture is by Oceanco’s in house team and Azure Naval Architects. Styling and interior design is by Andrew Winch Designs. Wenge wood, bamboo, marble, gold leaf, and more combine for a decidedly Asian-inspired decor. With a 47’6” (14.5-meter) beam, Equanimity has accommodations for 26 in the owner’s party. Three doubles, two twins, and three VIPs cater to them. The owner’s study can convert to a guest room when needed. When fewer overnight guests are aboard Equanimity, one VIP becomes the library.

The high number of guests meant that Equanimity needed to comply with PYC. The safety-focused PYC governs megayachts with 13 to 36 passengers. It also applies regardless of private use vs. charter. PYC resulted because of the boom in super-size superyachts, and because of SOLAS’ limitations. SOLAS was created for merchant ships, not pleasure boats, after all. PYC therefore is intended to give megayacht builders, designers, owners, and more a single frame of reference.

Oceanco’s in-house team and the owner’s teams worked quite closely with regulators to ensure that Equanimity would ultimately strike the right balance between safety and luxury. The megayacht meets Lloyd’s classification standards. Her steel hull is further strengthened for navigating in ice. (For those of you who like to look up specific regulations, it’s Ice Class 1E.) While in warmer waters, Equanimity will likely see her on-deck pool be used. It’s 215 square feet (20 square meters) and has jets. The owner of Equanimity also has a private hot tub outside the master suite. All guests get to use the indoor-outdoor wellness area. It’s just inside the transom, which folds down. The area includes a beach club, sauna, hammam, plunge pool, and beauty salon. There are also experiential showers, which are popular at high-end spas and hotels. They have various settings for water strength, temperature, and even lighting.

Equanimity further has a helipad on her upper deck, and totes two custom Hodgdon Yachts tenders. She’s capable of a reported 20-knot top end with her twin 4,828-hp MTUs. The megayacht is expected to be used privately.