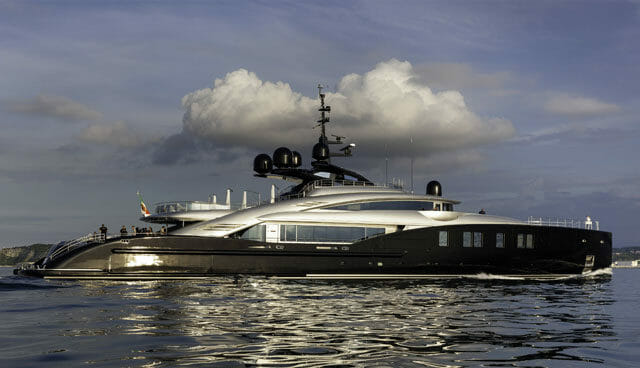 Okto has a traditional full-displacement hull form, despite looking more like a fast maxi open. And that’s partly the idea. With the Granturismo series, ISA Yachts wanted to maximize alfresco space like maxi yachts do, without sacrificing the comfort of full-displacement designs. (Since maxis also prioritize swift speeds, they aren’t as comfortable at the lower end of the speed range.) As a result, the series has is a good-size sundeck and several private outdoor areas. Further as a result, Okto tops out at a reported 18½ knots. Cruising speed is reportedly 16½ knots. Power comes from twin Caterpillar diesels.

Okto bears styling is by ISA Yachts’ frequent design partner Andrea Vallicelli. She actually has four decks, despite appearing to be low profile. The black and silver paint scheme helps to keep the visual trickery going.

The yacht accommodates 12 in the owner’s party and 17 crew. ISA Yachts has not revealed full details of the general arrangement. For now, it is likely safe to assume that the master suite is forward on the main deck. We do know that three crewmembers serve as house staff and have single cabins.

Inside Okto, the owner worked closely with Alberto Pinto to make the most of the 36’1” (11-meter) beam. Decor elements have not been publicized, either. Regardless, it is interesting to note that the owner and the owner’s team were closely involved in other aspects of Okto, too. They attended some of the tank tests early on, when the hull design was in development, for example.