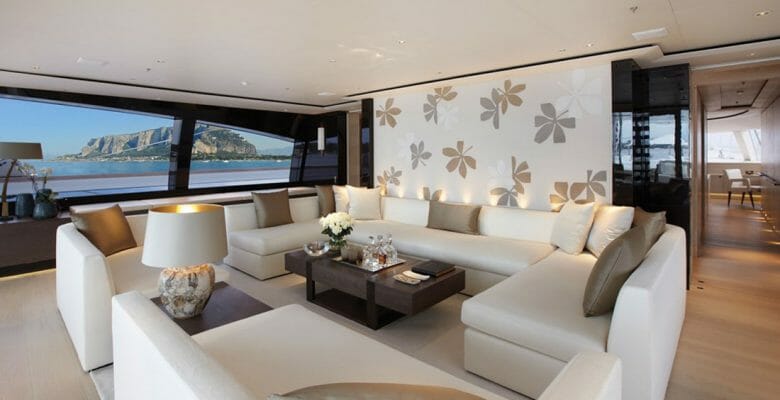 Yacht buyers who thrill to regatta racing yet crave the creature comforts of motoryachts set out to build a yacht that blended both. The result is Twizzle, launched in 2010 by Royal Huisman. With her build personally overseen by her owners, Twizzle is available for both sale and charter, at the Monaco Yacht Show as part of Y.CO’s display.

The recipient of both the “best sailing yacht, 40 meters +” and “best interior” awards from the International Superyacht Society within a year of her delivery, the 188’6” (57.49-meter) Twizzle has proven herself to be a spirited sailing superyacht. She raced in the 2011 St. Barths Bucket, competing again in 2012 and taking third place in her class. Twizzle was too busy in 2013 to race there again, having undertaken a circumnavigation with her owners. Following the completion of the global cruise, the flybridge ketch returned to St. Barths in 2014 and nabbed victory once again.

Twizzle has also proven to be more motoryacht-like than other mast-fitted craft. Despite what you may assume by her low profile, she has a capacious interior, designed by Redman Whiteley Dixon. Rooms are arranged to suit varying needs: big crowds one day, intimate gatherings the next. Twizzle is made to feel even roomier thanks to warm, light oak, scrubbed to bring out the natural grains, paired with an abundance of soothing, natural tones throughout. Dark tones like chocolate and black do appear in the three guest staterooms, owners’ suite, and more, though used solely as accents. Equally important: The five crew cabins and captain’s cabin are finished to guests’ standards.

Further worthy of note, Twizzle’s owners investigated how to offset the environmental impact of her construction materials and overall build. They additionally offset her carbon usage for this year, via supporting a wind-energy plant in New Caledonia. (The owners also happened to visit that plant in 2013.) The offset was confirmed by both a United Nations agency and Yacht Carbon Offset, a company that works with independently verified greenhouse-gas-saving projects.

Click through our photo gallery of this flybridge ketch to enjoy an armchair tour.