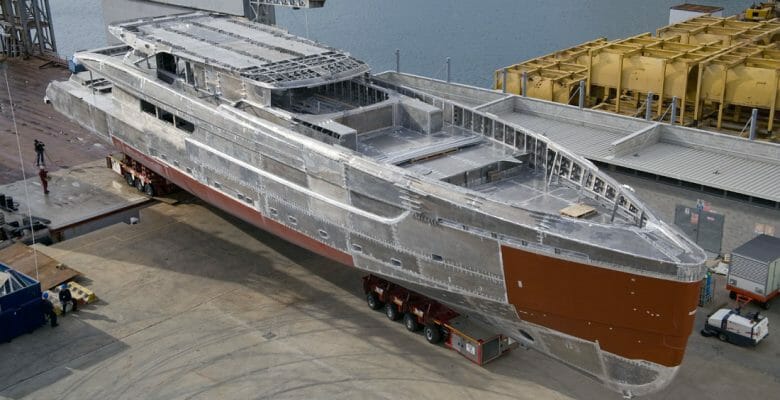 A French buyer has just over a year before cruising aboard project S501, the first in Tankoa Yachts’ 50-meter (164-foot) series. S501, measuring 163’7” (49.9 meters), completed a significant step in November, seeing the hull and superstructure joined.

The photos here reveal the all-aluminum, in-progress megayacht being maneuvered into her finishing shed. That shed is at Tankoa Yachts’ Genoa, Italy facility. The hull and superstructure were made offsite, down the coast in Marina di Carrara. 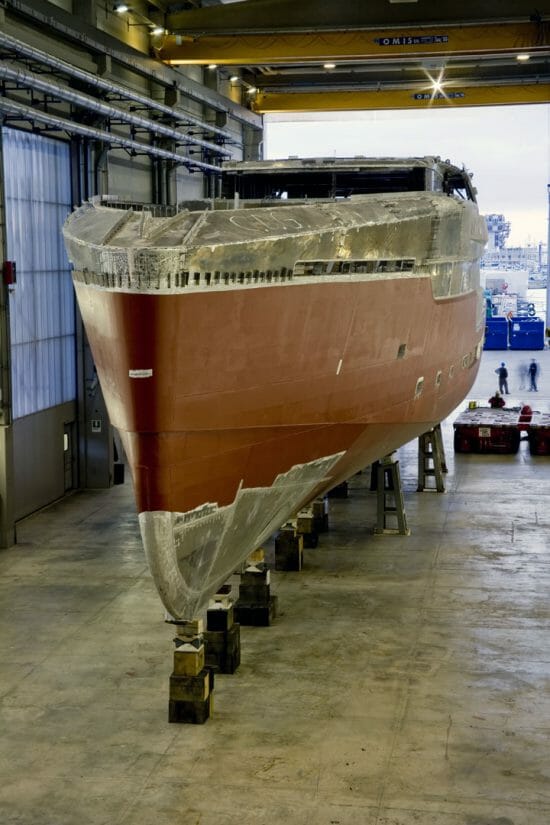 Major machinery like the 8V4000 series MTUs and gensets are already in place aboard S501. Come sea trials next year, Tankoa Yachts expects a 16-knot top end at half load. A range close to 5,000 nautical miles should ultimately be possible, too, at 12 knots. Tankoa Yachts turned to a naval architect with experience in the cruise-ship industry for the hull design. He penned a modified plumb bow and a wide, hard chine for seakeeping. He also stipulated high freeboard to keep spray down.

Performance and comfort characteristics like these were drivers behind the creation of this Tankoa Yachts series. (S501 was signed in February 2015, after initial drawings were completed.) The yacht was planned around her technical areas, rather than the other way around. Further of importance were the benefits of a below-500-gross-ton yacht.

All of this comes wrapped in a styling and interior-design package by Francesco Paszkowski Design that emphasizes outdoor enjoyment. It’s literal, thanks to larger-than-expected alfresco areas and fold-down platforms. Those platforms aboard S501 include balconies in the master and the beach club. (The teak-lined beach club doubles as the tender garage.) It’s also figurative, thanks to sliding glass doors in the dining room and full-height glass on other decks.

Paszkowski and frequent design partner Margherita Casprini are lending a warm, welcoming feel to the interior, which promises many amenities. Both the VIP and master are on the main deck. The master makes the most of the 30’8” (9.4-meter) beam. Four additional guest staterooms, a gym, and a cinema are aboard, too. Equally important, S501 should allow crew to conduct their duties effectively thanks to dedicated passageways.