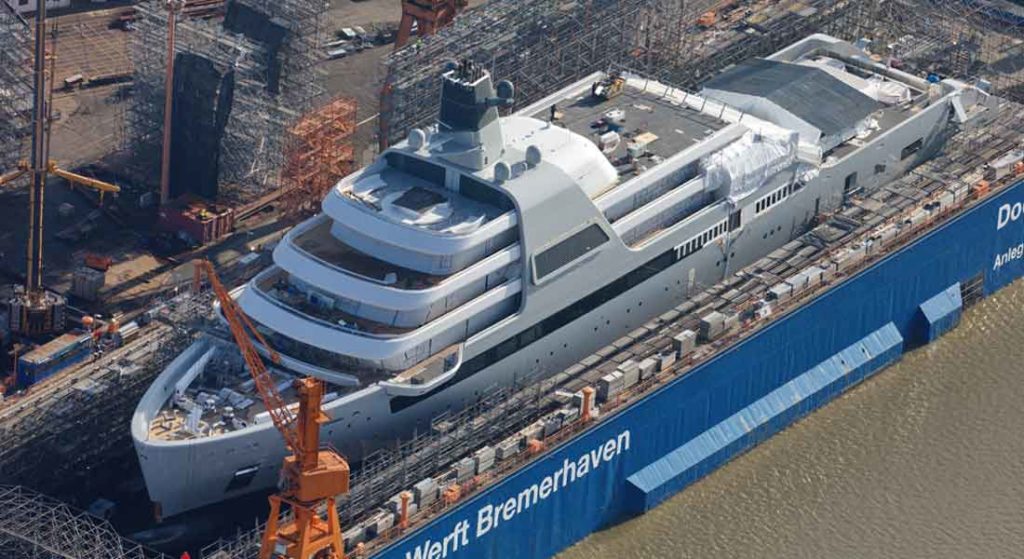 One of the largest megayachts in build worldwide for the past several years may finally be months away from hand over. The long-clandestine project Solaris came into view late last week in Germany. In related news, Solaris could turn out to be her builder’s last yacht.

These aerial images are from Bremerhaven-based Lloyd Werft. The same shipyard, which typically builds cruise ships, built the 377-foot (115-meter) Luna back in 2010. (For clarity, the nasty ongoing series of divorce-related lawsuits over Luna do not involve the shipyard.)

In keeping with megayachts of this magnitude, confirmed details are scarce. For example, crew overseeing her initially indicated her LOA to be just over 456 feet (139 meters). However, her length may actually be more like 459 feet (140 meters). Interestingly, some media disagree, believing she’s as large as 476 feet (145 meters). Additionally, some yacht watchers believe styling is from Marc Newson, and that her owner is Russian—and a repeat super-size superyacht owner at that. Even the anticipated delivery date has remained confidential since work began around 2016. However, due to her current status, Solaris should be finished by the end of this year.

As mentioned above, Solaris might be Lloyd Werft’s final yacht project. According to German media reports, the shipyard’s management team informed workers on February 19 that it may close its doors at the end of this year. The reason is a significant pandemic-related downturn in business. The coronavirus crisis has hit the cruise-ship market extremely hard, leading to cancelled contracts for new vessels. Apparently, though, potential buyers are in talks to acquire the company, and therefore preserve jobs. Lloyd Werft has been operating in Germany since 1857.