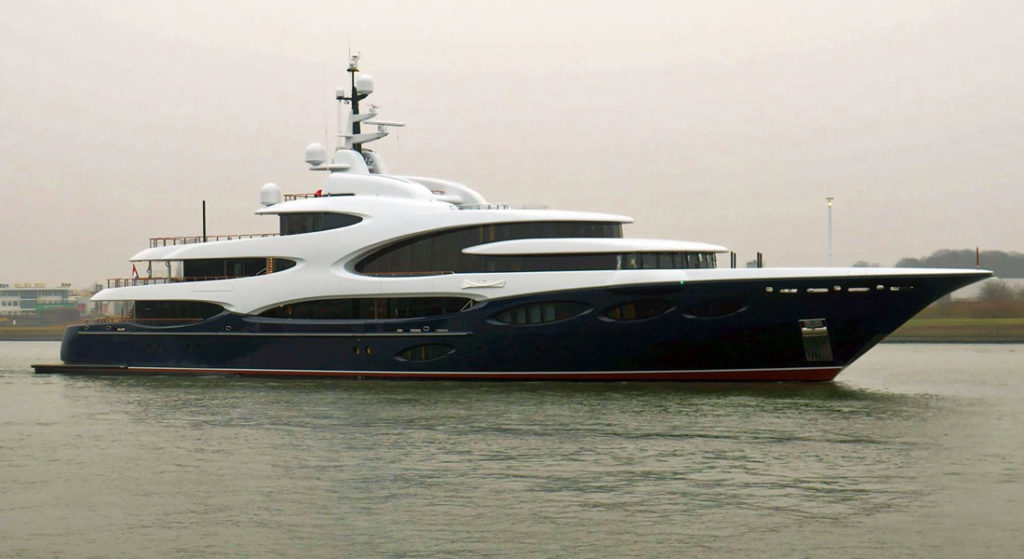 Sea trials saw Oceanco Y715 off the coast of The Netherlands. Following a fourth day of trials, the motoryacht joined Oceanco Y712, the shipyard’s record-setting sailing yacht, in Rotterdam.

Y715, a 290-footer (88.5-meter), launched on Halloween last year. Oceanco cannot divulge many details about her, at least at this point. Therefore, the few facts it’s released include Sam Sorgiovanni Designs serving as the stylist. Additionally, Azure Naval Architects is collaborating with its in-house team for engineering. Amid her 47’6” (14.5-meter) beam are relaxation areas outfitted by Sam Sorgiovanni Designs as well. No information is yet available on the decor, the number of staterooms, or guest or crew capacities.

The sea trial photos, though, reveal something interesting not yet previously known. Complementing her dark-blue hull, Y715 has a wood-look transom. It appears to be the same design element that debuted aboard another Oceanco styled by Sorgiovanni, namely Anastasia, in 2008. If it is indeed the same, then what appears to be wood is actually faux painting, so good that it fools the eye even up close.

Y715 isn’t the only Oceanco on the move with the yard staff as of late. The sailing-yacht project referred to as Y712 undertook the trip to Rotterdam over the weekend. Also known as project Solar, Y712 bears styling and interior design by Nuvolari-Lenard. Furthermore, her 348-foot (106-meter) length and volume closing in on 3,000 gross tons make her the largest sailing superyacht in the world.

Which brings up an important point. While Y712 is the second sailing yacht to emerge at Oceanco, she’s really it’s first. Oceanco did construct the 282-foot (85.9-meter) Aquijo, which saw delivery last year. But, Vitters Shipyard signed the contract with the client, subbing construction out to Oceanco.

Y715 is back at the shipyard as of this writing, while Y712 remains in Rotterdam. Here’s a good look at the latter, with glimpses of Y715, in Rotterdam on Sunday. The video is by Dutch Yachting, a social-media site dedicating to the country’s yachting industry: