You are here: Home / Builders / Front Street Shipyard Set for Another Expansion 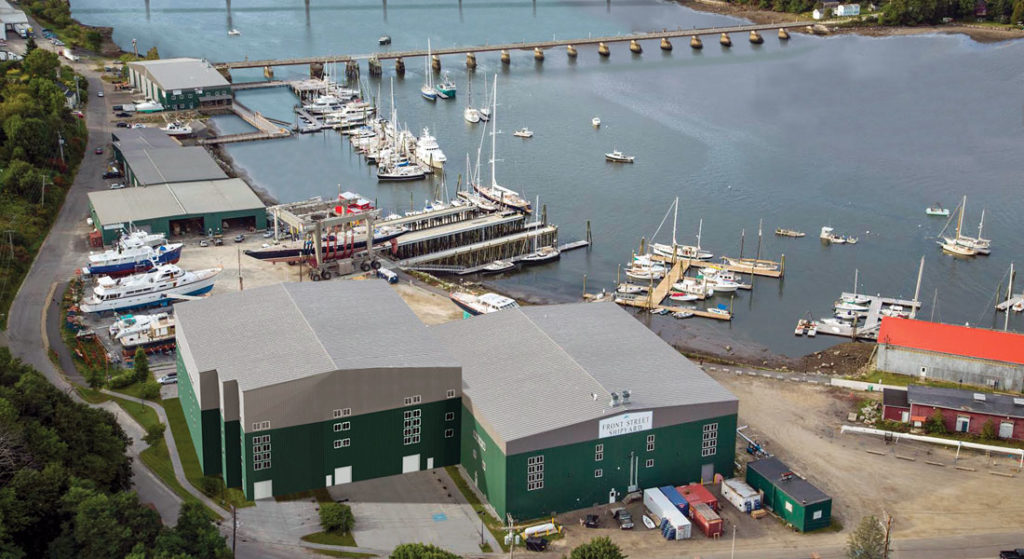 Repair and refit prowess, plus proximity to popular cruising grounds, has helped Front Street Shipyard win multiple yacht projects. While it’s expanded its footprint in recent years, a further expansion is underway. An entire new building is going on site, set to boost capacity—and, of course, the local economy.

Based in Belfast, Maine, Front Street Shipyard benefits from deep water right at its docks. It also has 1,500 feet (457 meters) of waterfront. For the past several years, it has hauled and worked on yachts and megayachts up to about 154 feet (47 meters). One significant recent refit was Berilda. In fact, the project was so extensive that it’s more accurate to call it a rebuild.

Around the time you’re reading this, the new shed should start taking place. Referred to as building 6, it’s the green structure in the lower portion of the rendering on this page. The property upon which it sits was previously a parking lot, owned by the city of Belfast. Front Street Shipyard secured the purchase of it in the past several weeks. Once building 6 opens this fall, it will welcome a combination of vessels. Front Street Shipyard says it will house large-yacht refits as well as commercial builds.

However, megayachts will be the primary focus. Indeed, Front Street Shipyard indicates that building 6 will simplify its large-yacht operations. Height-wise, it will allow the existing 485-ton hoist to drive straight inside with yachts in its slings. With other sheds, the shipyard team needs to enlist extra equipment; not an issue, but not as efficient as they would prefer. On a related note, that hoist is reportedly the largest one in Maine as well as in northern New England.

Notably, the rest of the projects at Front Street Shipyard at present and through the building 6 construction process will remain unaffected. In addition, the shipyard expects to hire 40 more full-time craftspeople.

Front Street Shipyard opened its doors in 2011. Run by JB Turner, a veteran of the megayacht business, it was a refreshing change for the community. The site previously was home to a sardine-processing plant that closed in 2001. The facility and property, encompassing more than three acres, sat unused, deteriorating, for a decade.