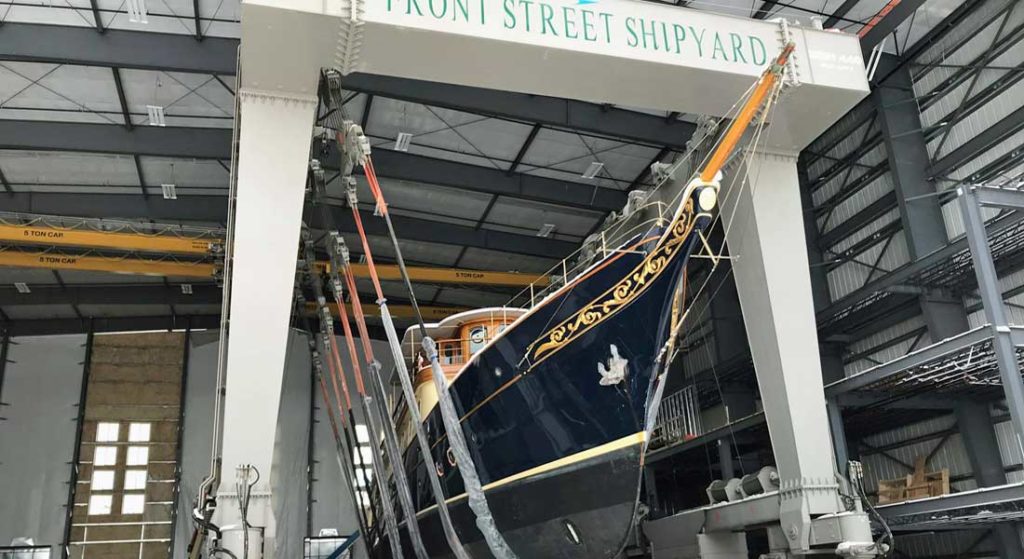 Over the past seven years, Front Street Shipyard has turned a long-defunct sardine-processing plant in Belfast, Maine into a busy yacht and megayacht facility. It performs refits as well as new construction. The yard commissioned a new construction of its own in recent months. The new shed called Building 6 just celebrated its ribbon cutting earlier this month, and wasted no time in welcoming Atlantide inside.

The shipyard expansion started taking shape last spring. Front Street Shipyard acquired the property, which was a parking lot, from the city. It did so because demand exceeded existing capacity. Specifically, inquiries for large-yacht refits were higher than it could accommodate. Simultaneously, Front Street Shipyard identified an opportunity to do more commercial work.

Building 6 measures 22,500 square feet (about 2,090 square meters). Furthermore, the height permits Front Street Shipyard’s 485-ton mobile hoist to carry megayachts directly inside. On a related note, that hoist is the largest one in northern New England.

The video above, from the ribbon-cutting ceremony, shows a preview of the space. Finish work is ongoing, through early January. Regardless, Building 6 is complete enough to begin accommodating refits. Atlantide rolled in on Thanksgiving weekend, for instance. It’s not the first time that the classic yacht has called on Front Street Shipyard, either. In fact, she underwent refit work there from late 2012 to spring of 2013. Surveyors and the shipyard team identified that the 122-footer (37.28-meter), built in 1930, required a good deal of work. It was due to 15 years passing since her prior major refit. Therefore, the owners, who acquired her earlier in 2012, committed to a series of repairs over time.

Front Street Shipyard hasn’t yet disclosed the punch list for Atlantide this time around. However, during her last visit, she saw a good deal of exterior teak spruced up. Mechanical systems underwent upgrades, too. The yard rebuilt the exhaust system for the original eight-cylinder Gardiner engines, among other things.

Expect more megayachts to make use of Building 6 in the coming year.