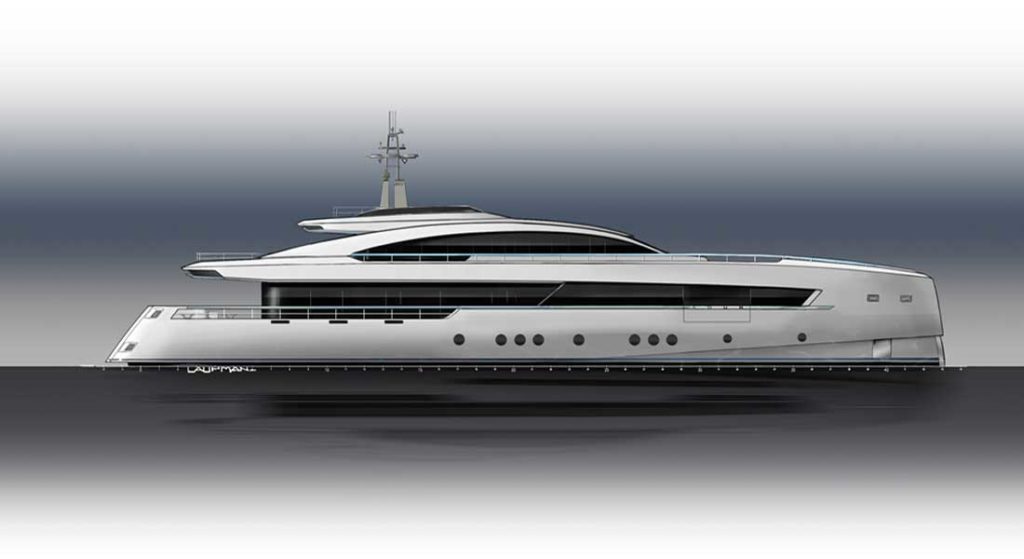 A number of details about a 148-foot (45.2-meter) megayacht under construction at Hakvoort Shipyard are still under wraps. However, Project Adur does promise to attract attention for her performance. In fact, she should be as impressive at her top speed as she should be in what she does—and doesn’t—burn in terms of fuel.

The athletic, even young-in-spirit Project Adur involves a trio of Dutch companies. Besides Hakvoort, Omega Architects and Van Oossanen Naval Architects are contributing partners. The former company penned the styling you see in the rendering above. This includes the vertical bow. The owners had special requests for styling, too. This includes scooped bulwarks for each deck, with stainless steel handrails that did not interrupt the views. Furthermore, they eliminated the rubrail, for what Hakvoort calls a clean “shaved” bulwark. Van Oossanen Naval Architects, meanwhile, is responsible for the engineering of the aluminum-hulled megayacht.

Project Adur has a particular emphasis on performance. In fact, the owners wanted a swift yacht. Simultaneously, though, they wanted one that wouldn’t earn a reputation as a fuel guzzler. Van Oossanen Naval Architects fulfilled both requests. First, it’s ensuring that Project Adjur will hit a top speed of 26½ knots. Not only is that fast for an aluminum yacht of this size, it’s also pretty fast for any yacht of this size. She’ll be capable thanks to twin MTUs as well as two boosters. Further noteworthy, those boosters will be electric, connected via the yacht’s gensets.

To ensure fuel economy, naturally Project Adur will cruise at normal speeds. At 12 knots, for example, she should see 3,800 nautical miles. For better fuel economy, though, the yacht will feature a Hull Vane. The Hull Vane is a fixed foil—what you might consider a spoiler on an automobile. Patented by Van Oossanen Naval Architects, the foil is proven on a number of commercial ships and some yachts. Depending on factors like LOA and speed, the fixed foil reportedly can lead to five to 15 percent fuel savings.

Interestingly, Omega Architects is additionally the interior-design team for Project Adur. The owners requested three guest staterooms below decks, along with a main-deck master suite. The nearly 28-foot (8.4-meter) beam should make these areas enjoyable. So should contrasting colors and textures, like tones of sand and cream, as well as bronze details. Time in (emphasis on “in”) the water should be enjoyable, too. According to their management team at Ocean Independence, the owners will tote a mini submarine as one of the watertoys. They also plan to enjoy diving.