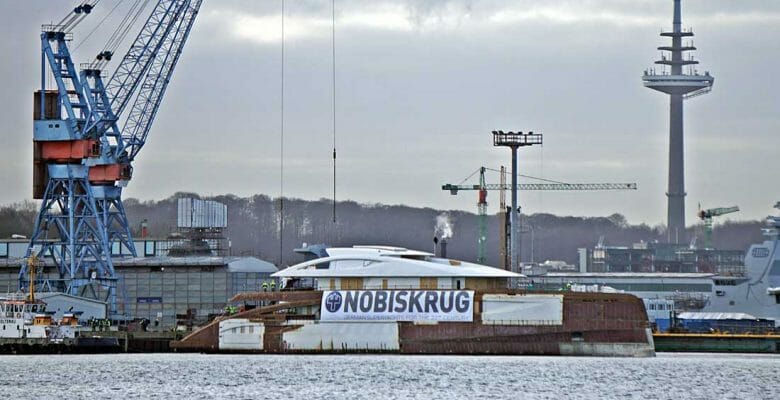 We are now getting a better idea of what the code-named Black Shark should look like upon delivery in 2021. The recently joined hull and superstructure entered the water at Nobiskrug’s shipyard in Kiel, Germany. Two tugs then transported her to the yard’s other facility in Rendsburg.

The 253-foot (77-meter) megayacht, whose keel laying took place in February, features a strong, reverse-bow design, with graceful arches especially aft and up top. Styling comes from Winch Design. As for more specifics, unfortunately they are not yet available. However, the photo shows that Project Shark appears to have a fold-down hatch aft at the waterline. Fitted with three ports, this hatch could denote the beach club, which reportedly will be quite a healthy size. In addition, the beach club will include a spa, something becoming more of a trend these days. Other hatches, meanwhile, likely represent tender bays.

In an unusual move, given how confidential a number of large megayachts are these days, the build and design teams have pledged to publicize Project Shark from keel to completion. “We want to give a clearer understanding of our industry and how exclusive creations are coming to life, who are the people behind,” explains Evgeniy Kochman, chief executive of Imperial Yachts, which represents the owner. 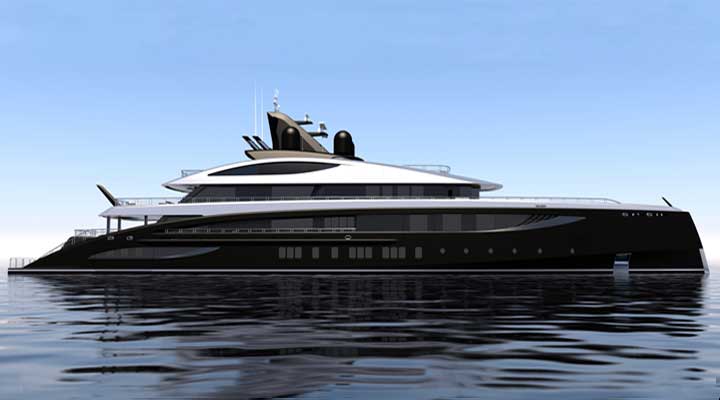 Following the yacht arrival in Rendsburg, the teams did indeed provide an update. We now know that the hull will feature a matte-black paint job mimicking sharkskin (above). The superstructure, meanwhile, will show off metallic silver tones. In keeping with the shark theme, the mast shape will resemble a shark fin.

While we wait for more updates from the teams, upon completion, the megayacht will total five decks. Three of these will include dining and lounging areas as well as private quarters for the owner’s party, created in conjunction with Sinot Yacht Architecture & Design. Staterooms will accommodate 12 people in that party, too. Of course, Black Shark will enjoy transatlantic range as well. Finally, in anticipation of the new IMO Tier III regulations going into effect next year, the yacht is engineered for reduced nitrogen-oxide emissions.

Black Shark is set for delivery in springtime of 2021.