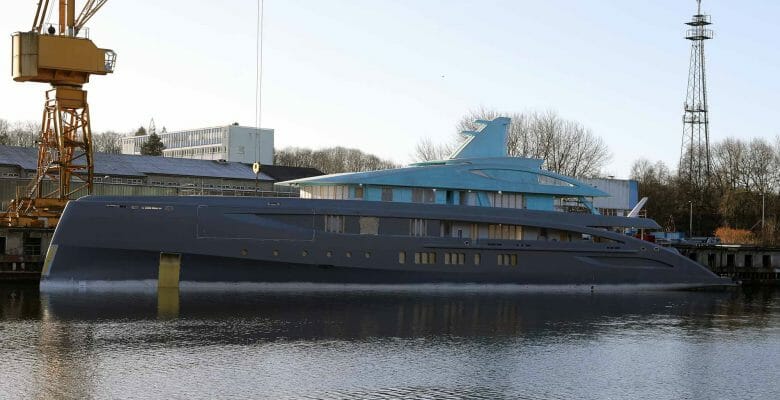 UPDATE, MARCH 2, 2022: The next time Black Shark appears out in the open, her owner will be a few short weeks away from taking delivery. Nobiskrug and owner signed a contract to keep construction and completion in the shipyard’s Rendsburg, Germany facility. It was necessary due to Nobiskrug’s takeover by Tennor Group.

Thirty-five months following her keel laying, Black Shark appears again in the waters outside of Nobiskrug in Germany. The motoryacht is starting to show more of the signs that she’ll resemble the denizen of the deep sharing her name.

At 253 feet (77 meters), the megayacht has styling from the drawing tables of Winch Design. One of her most notable shark-like features is her mast, which resembles a fin. Since Black Shark is still in the outfitting stage, the final paint is not yet finished. When it is, however, you’ll see a matte black color on the hull that further will mimic sharkskin. And, in a nod to the pale greys that some real sharks have, the superstructure will have metallic silver paint.

Black Shark appears again after having been inside Nobiskrug’s sheds since December 2019. That’s when two tugs towed her from its Kiel facility to its Rendsburg facility. The journey took about three hours, including traversing locks and carefully clocking a top speed of 8 knots.

Unusually, the owner of Black Shark has been quite open to publicity. In fact, he gave the green light before the keel-laying ceremony. His representatives from Imperial Yachts say that the goal was to give an inside look at yacht construction, and the people behind it, too. “We want to give a clearer understanding of our industry and how exclusive creations are coming to life,” explains Evgeniy Kochman, Imperial’s CEO.

These are among the reasons why, for instance, Nobiskrug is chronicling her progress on its website. Furthermore, the shipyard and parties like Sinot Yacht Architecture & Design, the interior design team, can reveal she’ll have five decks. Accommodations for 12 and a capacious beach club with a spa are highlights as well. Overall, the megayacht has a volume of 1,080 gross tons.