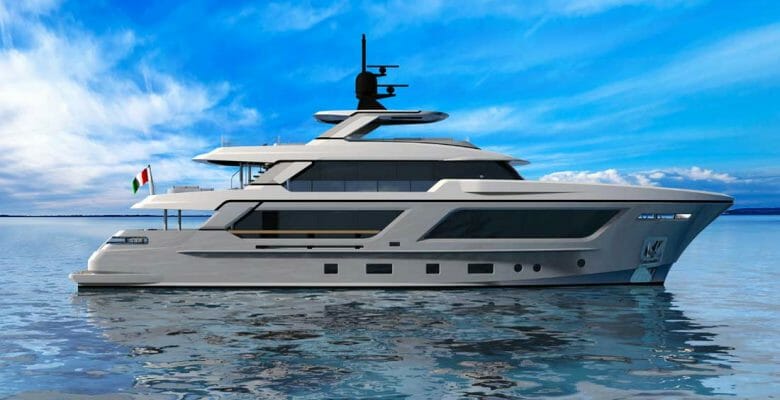 An Asian owner who thoroughly enjoys diving adventures, among other explorations, is the newest customer for Cantiere delle Marche. In fact, he signed a contract for a model known as the MG115, with his being the second hull so far, on Christmas Eve.

The MG115 is a four-deck explorer in a compact 115-foot (35-meter) package. Despite that seemingly small size, though, the megayacht has big-boat equipment and amenities. With naval architecture by Cantiere delle Marche’s longtime collaborator Hydro Tec, the project makes the same performance promise as the first MG115. (On a side note, that MG115 became the third American contract for Cantiere delle Marche in 2019.) As for that performance, she’ll see a range reportedly upwards of 5,000 nautical miles under twin 715-hp Caterpillar power. She should also reach a maximum speed of 13½ knots. Between the modest horsepower and the explorer-oriented engineering, fuel consumption should be relatively low, too.

Cantiere delle Marche hasn’t specified what that fuel consumption will be. It also hasn’t provided too many details about the new MG115. Regardless, so far we do know that the owner will be collaborating with Francesco Paszkowski Design for the interior. The owner has requested four guest staterooms below decks, two being VIPs, and a master suite forward on the main deck. In keeping with current trends, these staterooms all benefit from large ports. (Francesco Paszkowski Design is further responsible for styling of the MG115, and indeed the full MG lineup.)

Six crewmembers will join the owner and his guests on their adventures, further handling equipment like the so-called “invisible crane.” Even though Cantiere delle Marche hasn’t elaborated on this, it’s likely a tender davit that stows flush with the superstructure, to be unobtrusive when it’s not in use.