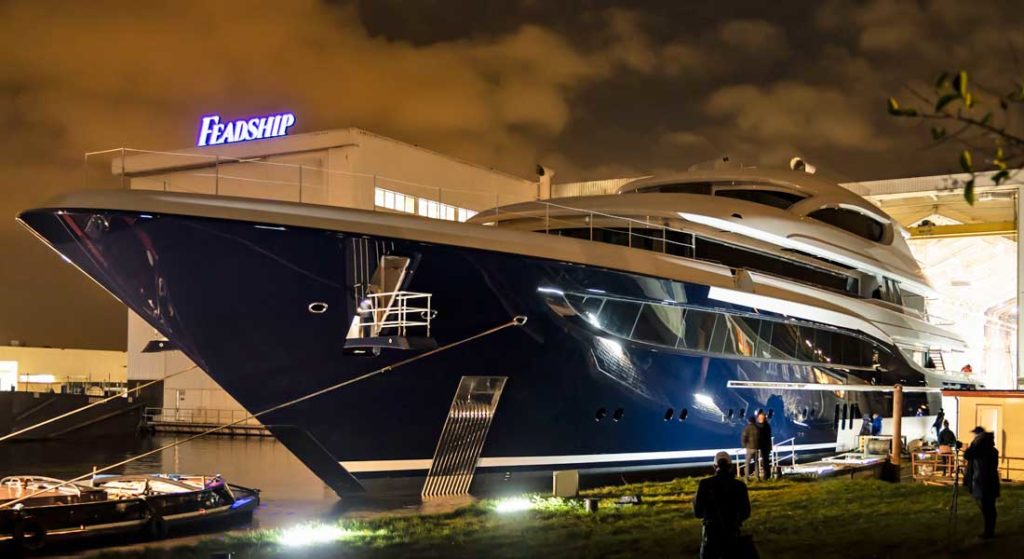 All 239 feet (72.85 meters) of Feadship Project 705 are now out in the open at the shipyard. She floated out of her build shed this week, in preparation for the traditional christening formalities in a few weeks’ time.

When we last saw Feadship Project 705, she was on the move to the Royal De Vries shipyard in Aalsmeer, The Netherlands, from the subcontractor’s construction site. Even without the paint job that she now bears—featuring a rich blue hull and white superstructure—her elongated bow and shapely curves up top stood out. Now nearly complete, Feadship Project 705 additionally shows off large swaths of glass. In fact, although the nighttime photo makes them hard to see, the megayacht has glass railings. Teak caprails top them, too.

The owner of the still-confidential yacht is a repeat customer for the shipyard, who has spent many years cruising aboard his previous delivery. His project manager, Gerhard Dekker, calls the new yacht “exceptional,” as well as “a textbook example of teamwork.” To that end, he says, “It may be a cliché but I truly believe that it takes a team to build a dream.”

Part of that team includes the interior designers from RWD. They, with the owner, incorporated high-gloss eucalyptus wood onboard. Of course, Feadship Project 705 shows off stainless steel aplenty, too.

Feadship pledges to release the megayacht’s name once she celebrates her official launch ceremony. It further pledges to reveal some of the inventive aspects of the design and build. Stay tuned.