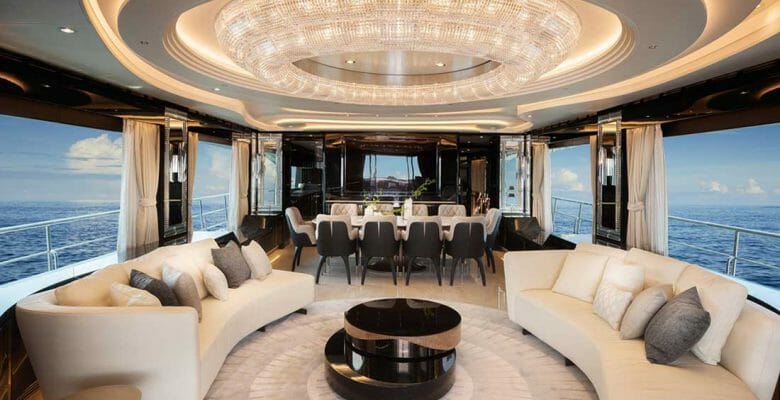 To say the owner of The Legion is enthusiastic about building and owning yachts tailored to his tastes is an understatement. This repeat Horizon customer traveled from his home in Australia to the shipyard in Taiwan nearly two dozen times during her two-year build. Why? Simple: “I didn’t want the same as everybody else.” To that point, he not only requested, and received, a modified RP110, but also enjoys features and conveniences that arguably no other Horizon owner does.

The owner of The Legion previously owned two other Horizons. Between the years spent cruising on them and visits to yacht shows globally, he created a checklist of must-haves for the new yacht. Also, he remained personally involved throughout the design and build process. With the proven RP110 as the starting point, designed by the Espinosa studio, Horizon lengthened the yacht. The Legion measures 121’10” (about 37.2 meters) due to a five-foot (1.5-meter) hull extension and deeper swim platform. 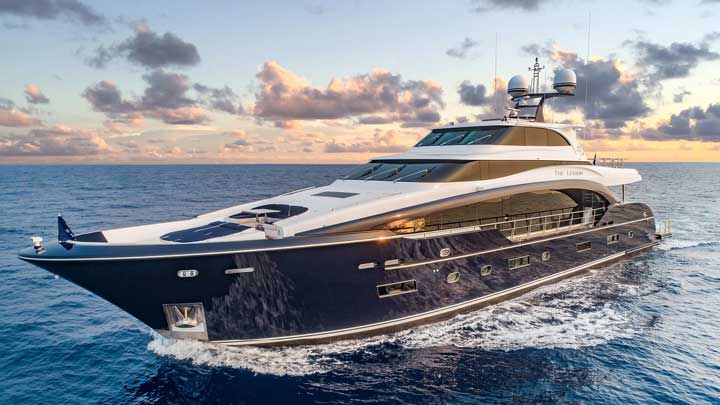 Specifically, the latter stretches an oversize 10’10” (about 3.4 meters), purposely to hold a Scout sportfisherman. It’s also a custom design, as per the owner. Aritex, a Horizon subcontractor, made it of carbon fiber. In addition, the swim platform is a hi-lo design, with three settings to make launching the boat easier. Meanwhile, the hull extension created more entertaining space on the main aft deck and a cozy beach club. The Legion owner and guests enjoy a sauna and a bar here. Alternately, the owner can stow additional watertoys here. And yes, the owner does do the stowing. In fact, he takes the wheel, too.

He can do so either from the raised pilothouse or the skylounge. The skylounge can become an indoor-outdoor area, thanks to a seven-foot-wide (about 2.2-meter-wide) opening window and sliding aft doors. Guests can then flow freely between the interior bar and alfresco hot tub with a mini waterfall.

“The entire team excelled,” the owner says, from Horizon to its craftspeople and interior designer Cor D. Rover. Check out the photos above, showcasing the glossy Macassar ebony paneling, black and gold accents, and more.