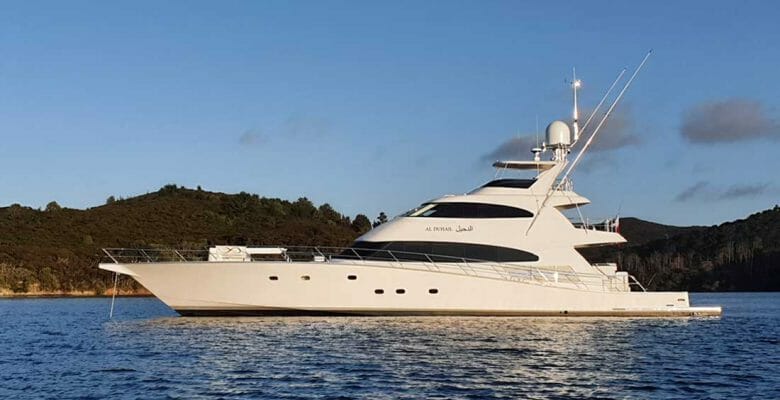 Sportfishermen appeal to those who want to spend hours in blue water. Al Duhail has already put a lot of blue water under her hull, even though she just saw delivery in February. She took her maiden voyage from Yachting Developments’ shipyard in New Zealand to Doha. That 8,000-nautical-mile journey reflects the capabilities that attracted the owner to the shipyard in the first place.

At 112’5” (34.3 meters), Al Duhail is a larger replacement for a same-named sportfisherman. Warwick Yacht Design recommended the yard because of its experience with projects like Satu, a 90-foot (27.4-meter), lightweight, fast fishing machine. Started as Hull 1017, Al Duhail is entirely carbon fiber composite. “When building Al Duhail, we took the technology of standard fiberglass and applied it to carbon,” Ian Cook, the yard’s managing director, explains. “This allowed us to reduce the weight of the yacht, while also increasing the speed and range. As a result, she is faster than her predecessor, goes further, and can carry more fuel.” Specifically, this new fishing superyacht reportedly tops out at 31 knots, with a range of 2,000 nautical miles at 10 knots. Power comes from twin MTU 12V2000 M96Ls, allowing a reported 20-knot cruise, too. 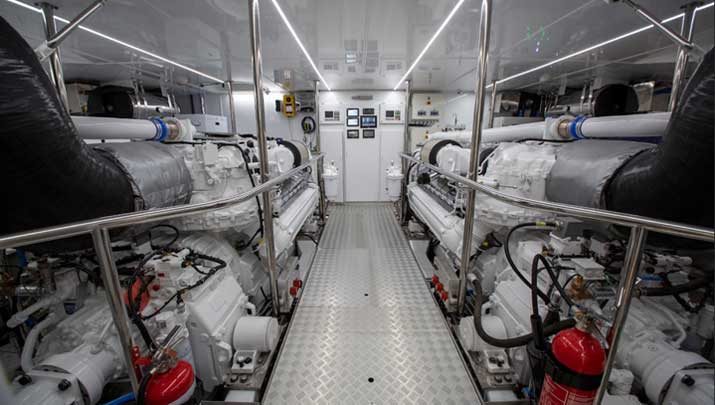 For the interior, the owner’s family collaborated with Yachting Developments’ in-house team. “They were seeking a simple, modern, and neutral interior that was not overdone,” explains Blair Morten, one of the designers. Therefore, light-tone oak is the predominant wood, with a semi-gloss finish and its natural grain patterns visible. Additionally, walnut serves as an accent wood. Meanwhile, happy punches of color draw the eyes to the furnishings from the staterooms to the saloon.

When they are done fishing, the owner’s party of 10 can dine on the day’s catch around the main dining table. After a good night’s sleep in the five staterooms, they can pursue big game once again. Tuna tubes, livewells, fighting chairs, ice slurry makers, and more accoutrements are at their disposal in the ample cockpit. Alternately, they can go diving.

Take a look onboard via the photo gallery above.