The people of Plymouth, England were the first to see the newest Princess Yachts model when she started sea trials in mid-May. The X95 megayacht not only ushers in a new flying-bridge series, but also dramatically different styling.

The British builder purposely pursued a sea change in styling in working with its longtime design partner Olesinki as well as the famed studio Pininfarina. Princess refers to the X Class as the Super Flybridge Yacht series, and not just because she’s a superyacht. In fact, her main and upper decks extend almost the full 95’5” (29.1-meter) length of the yacht.

To accentuate that sensation of space, the X95 has an open interior arrangement, with clear sightlines from fore to aft on the main deck. Of course, picture-window-like ports help accentuate the feeling, too. Additionally, according to Princess, the interior configuration gives you and your guests 40 percent more usable space than comparably sized flying-bridge motoryachts. You get 22’3” (6.77 meters) of beam for relaxing, dining, and planning your day’s voyage. 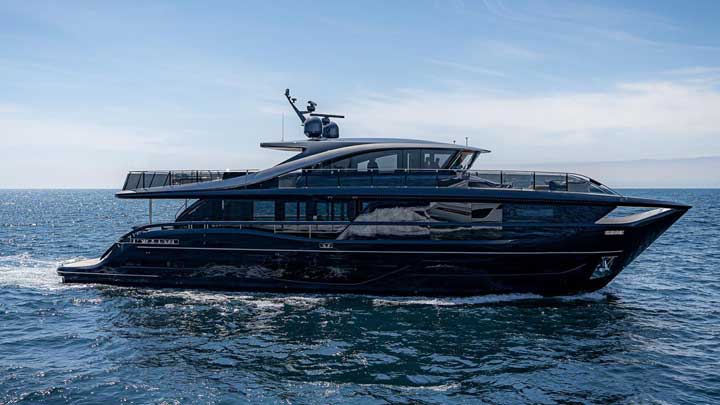 Since the X95 is a semi-custom series, you can request a main-deck master stateroom, and other personal touches. However, hull number one situates the stateroom below decks, with the three guest staterooms. Interestingly, hull number one further has a custom gym on the lower deck. Since a treadmill was among the requests, Princess lowered the floor and added more overhead clearance, to nestle it in and ensure more comfort when running on it.

The new megayacht model should debut at boat shows later this year. In the meantime, other interior options include a TV room or playroom fully forward on the main deck. They also include a beach club instead of a tender garage. Finally, in keeping with Princess tradition, the X95 should see healthy speeds. Anticipate a 26-knot top end under MAN power.