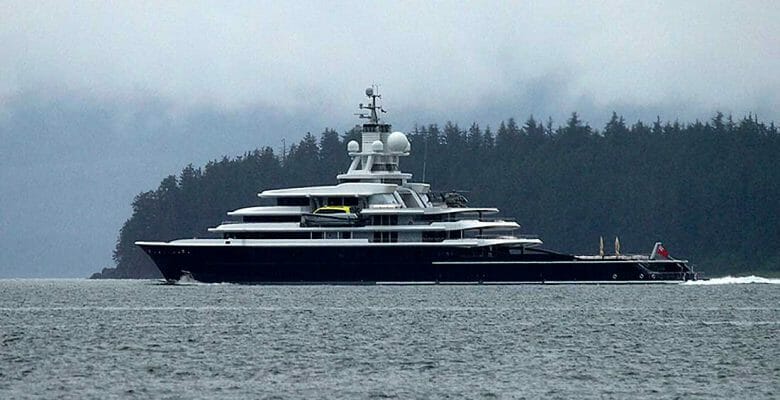 UPDATE, MAY 31, 2021: Earlier this year, a Marshall Islands court sided with Tatiana Akhmedova in a Luna lawsuit. Her legal team filed proceedings there, since the yacht falls under the Marshall Islands Flag Registry. While that court indicated she should be declared the yacht’s owner, it reversed its decision just days ago. Specifically, the court says it cannot enforce the order because only a court in Dubai, where the yacht currently sits, can enforce change of ownership. According to a few British news reports, the court’s written statement reads, “The Republic of the Marshall Island Maritime Administrator will not comply with the Order. …the Court cannot compel the Administrator to comply with the Court’s order to transfer title.”

The highest court in Dubai has ruled against the owner of Luna in a claim he filed against his ex-wife. It’s part of a years-long, ongoing battle over ownership of the megayacht. This latest Luna lawsuit alleged nine-figure damages, which the court declared “groundless.”

Farkhad Akhmedov and Straight Establishment, an Akhmedov family trust and the registered owner of the 377-foot (115-meter) yacht, alleged that Akhmedov should receive AED847 million (about $230.6 million). The reason, according to the lawsuit, was a “loss of opportunity and moral damages,” with “opportunity” being charter income. Specifically, it claimed, the yacht has been unable to charter for 37 weeks, a loss of AED235 million ($64 million). The 37 weeks started in 2018, when Tatiana Akhmedova, Akhmedov’s former wife, had the yacht arrested. The lawsuit, dating back to April 2019, further argued unlawful arrest occurred.

Two lower courts in Dubai dismissed this latest Luna lawsuit over the past several months. Akhmedov filed yet a further appeal in January. The Dubai Court of Cassation, the emirate’s highest court, issued a binding ruling on that filing this week. The Khaleej Times newspaper, which obtained a copy of the court ruling, quoted it as stating, “The trial court…has rightly concluded denying the abuse of the right in the appellant’s litigation and that it was not intended to harm him.” It added, “The challenge on the appealed judgment shall be deemed groundless.” A primary reason for the decision: Straight Establishment previously saying that Luna is not a commercial yacht, a.k.a. charter yacht.

Despite the Court of Cassation’s judgment, the latest Luna lawsuit is not the last word on ownership. In fact, she remains drydocked in Port Rashid, due to Akhmedova having obtained injunctions in the Marshall Islands. Luna flies that country’s flag, so its registry is therefore reviewing the rightful ownership. Akhmedova acquired yet another injunction in England, where divorce proceedings led to a multi-million-dollar settlement in her favor in 2016. That settlement included Akhmedov handing the yacht over to his ex-wife, but he has fought the transfer repeatedly.