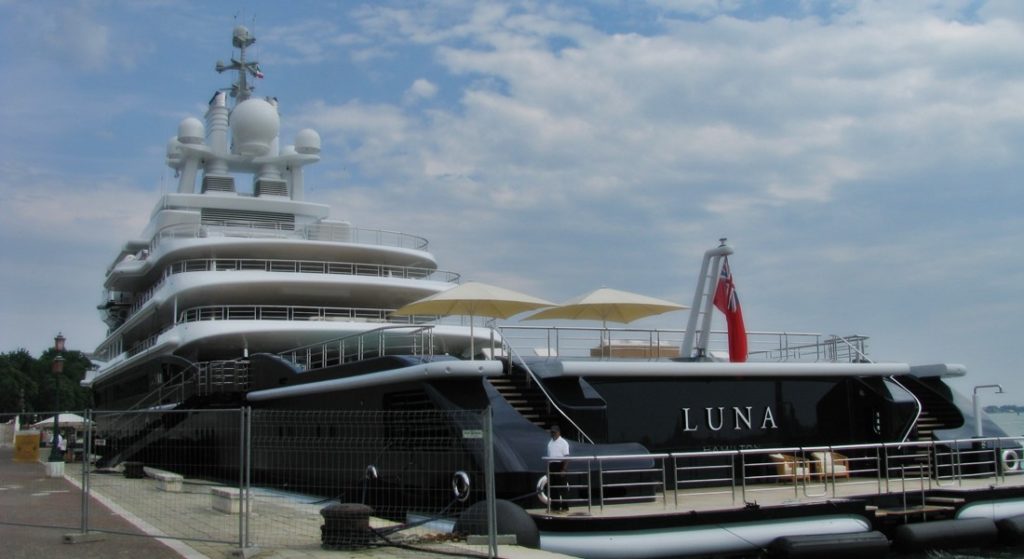 Despite widespread assumptions to the contrary, a Shariah court in Dubai has issued an interim ruling against the owner of one of the largest yachts in the world. The court states that the superyacht Luna belongs to his ex-wife.

Over the weekend, the Dubai Courts, which uses Islamic law (known as Shariah), denied an appeal by Farkhad Akhmedov, the ex-husband. He wanted the court to lift a seizure in place for several months. In May, authorities in Dubai arrested the 377-foot (115-meter) superyacht Luna as she underwent maintenance in Port Rashid. The Dubai International Financial Centre (DIFC) Courts, an independent, English-language common-law judiciary, ordered that seizure. It did so in enforcement of a decision by a London court in April. Akhmedov appealed the seizure, stating the London court order was unenforceable in the UAE.

According to Arabian Business magazine, the Shariah court made its decision over the weekend. The magazine further obtained a statement from the spokesperson for Tatiana Akhmedova, Akhmedov’s ex-wife. It states that she is “pleased that this court has also seen fit to maintain the arrest of Luna.” The statement adds, “In line with the UK court order, we will continue to arrange the formal transferal of Luna’s ownership to Ms. Akhmedova.” In fact, it continues, it’s “only a matter of time” before that occurs.

When Akhmedov appealed the DIFC Courts’ decision, Dubai’s Joint Judicial Commission removed the case from its jurisdiction. This occurred in July. The commission indicated that the superyacht Luna was the center of a matrimonial dispute. (DIFC Courts handle, among other things, maritime disputes.) Therefore, the Shariah courts should hear the case, it added. This led to media reports that Akhmedov would likely receive favorable treatment over his ex-wife.

Akhmedov and Akhmedova have been battling over a £453.5-million ($600-million) divorce settlement dating to December 2016. Akhmedov has reportedly refused to pay his ex-wife, however. This led to her obtaining a London court order to freeze his assets, including the yacht. The two were London residents during their marriage.

So, what’s next? Akhmedova’s lawyers tell Arabian Business that she intends to sell the eight-year-old yacht. (Lloyd Werft completed Luna in 2010.) They expect it to conclude quickly, too, stating interest from buyers already exists. Akhmedov, meanwhile, may appeal the interim decision.

If Akhmedova prevails, this should conclude an ugly chapter in the history of the superyacht Luna. Earlier this month, Nautilus International secured the crew’s freedom. The crew union convinced a Dubai court to return their passports.