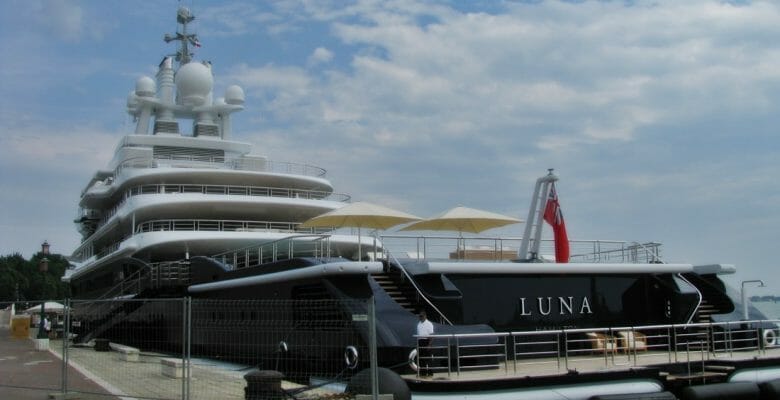 AUGUST 21, 2020: A Dubai court has rejected an appeal by Tatiana Akhmedova, ex-wife of Farkhad Akhmedov, to seize the yacht as part of the divorce settlement imposed by London’s High Court. Therefore, once again, it seems Akhmedov owns Luna. “Seems” is the operative word, however, since the Marshall Islands, the flag state where Luna is registered, is reviewing legal ownership.

FEBRUARY 12, 2020: A Dubai court of appeal has lifted the arrest warrant on Luna. According to the Financial Times, the court indicated that the impounding, dating back to 2018 and in place ever since, was based on improper application of law in England. Specifically, the Dubai court ruled, the British court that ordered the arrest “relied upon the principle of sharing the fortune” of a husband and wife, part of English law. However, this contradicts the United Arab Emirates’ policies, as well as that of sharia law, the Dubai court concluded. Despite this seeming to confirm that Farkhad Akhmedov owns Luna, lawyers plan a further appeal, to a higher Dubai court.

A settlement has come in a yearlong struggle over who in a divorced couple rightfully owns a 377-foot (115-meter) megayacht. Dubai’s Court of Appeal ruled that Russian oil and gas magnate Farkhad Akhmedov owns Luna. It therefore overruled a lower court’s order to seize the megayacht and grant ownership to his ex-wife, Tatiana Akhmedova.

Akhmedov and Akhmedova have been battling over a divorce settlement in London dating to 2014. Following Akhmedova alleging that her ex-husband refused to pay her, a London court awarded her 41 percent of her ex-husband’s assets in December 2016. The total: £453.5 million (nearly $600 million). Then, in early 2018, the same court ordered Luna arrested as part of the asset assignment. Luna was in Dubai. A Dubai civil court upheld the London court’s order in May 2018.

Akhmedov, however, appealed the seizure, arguing that the London court order wasn’t enforceable in Dubai. As a result, Dubai’s Joint Judicial Commission removed the case from the civil court’s jurisdiction last July. It stated that Luna was part of a matrimonial dispute, not a maritime dispute, and therefore belonged in Shariah court. Since Shariah courts typically favor husbands, it surprised case-watchers in upholding the seizure. Specifically, it ruled last August that Luna belonged to the ex-wife. But, days later, Akhmedov appealed. The yacht has remained in Dubai ever since.

Just last Wednesday, Dubai’s Court of Appeal revealed its decision. Akhmedov owns Luna, it asserts, because the lower courts improperly seized the superyacht. Specifically, the appeals court indicates, the London settlement from 2016 was unenforceable in Dubai. This, according to a statement that Akhmedov sent to several media outlets. The statement added that Akhmedova must pay his legal costs as well as those of a family trust, which he says owns the yacht.

“Mr. Akhmedov is delighted but not surprised by today’s court decision,” a spokesman tells the media. “Luna is one of the assets of a family trust which was set up for the benefit of all his family and dependents, and he is confident that no court anywhere in the world will endorse Tatiana’s unlawful attempts to take it away from them.”

Last Thursday, workers were replacing teak decking aboard Luna. She is still in Dubai as of press time. Representatives for Akhmedova plan another appeal.