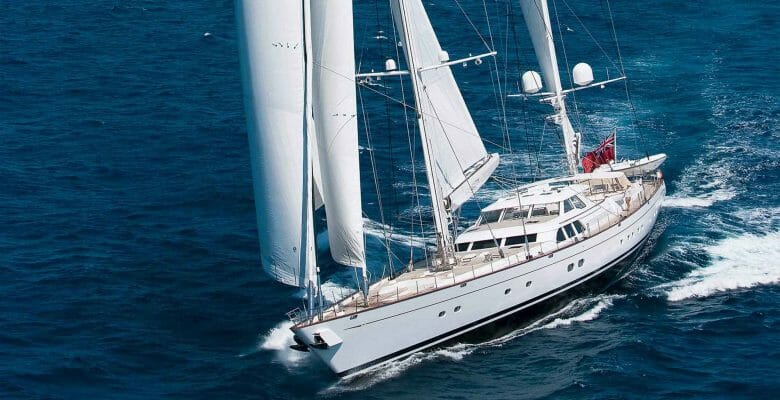 While motoryachts dominate the megayacht market, some significant sailing yachts are in development, too. This week the St. Barths Bucket crowd got a surprise with the announcement of Royal Huisman Project 410. A 279-footer (85-meter), she’ll be the world’s largest superyacht sloop.

The shipyard—which recently turned the hull of the world’s largest sportfisherman—is collaborating with Frers Design, Wetzels Brown Partners, and an owner with abundant sailing experience. Mani Frers of Frers Design is leading the styling and naval-architecture efforts. No images, though, are available yet of the profile. Neither are details about beam or draft. Regardless, Royal Huisman Project 410 intends to be a fast sailing yacht, adept even in light airs. Additionally, she intends to build apparent wind speed comfortably. Global cruising should be in the plans, too.

Despite the confidentiality surrounding some details, some notable facts are available about her onboard systems. For example, Royal Huisman Project 410 will receive Lloyds’ Hybrid Power certification due to an in-house-developed, energy-regeneration system. Specifically, a 2-megawatt battery bank will be part of it, permitting silent and emission-free operations. The complex board system supporting the energy-regeneration system draws upon Royal Huisman’s experience with Ethereal (above), which in 2008 became the world’s first hybrid superyacht. Plus, as much as possible, systems will be future-proof.

Yet another notable aspect of design, the shipyard is striving for structural components to be recyclable. Her hull and superstructure are both aluminum. As is tradition, her mast and boom are carbon fiber, from Royal Huisman’s sister company Rondal.

Finally, Wetzels Brown Partners’ interior design remains under wraps as well. For the time being, the shipyard says the looks “almost literally transport her guests into a New World.”