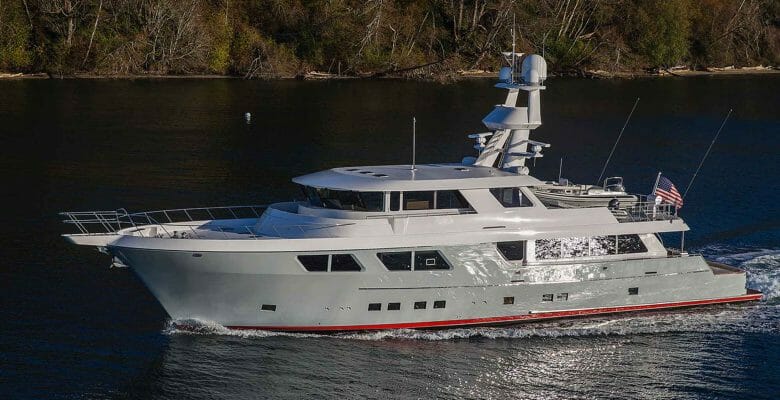 Capt. Jason Machovsky (below) was in the middle of Cazador’s Alaska season last summer when he learned Paul and Gary Nordlund hadn’t found a satisfactory buyer for their eponymous yacht yard. By September, he’d acquired Nordlund Boat Company, keeping its six decades of custom-yacht construction in the Pacific Northwest alive. While he’s also expanded into service and refit, Machovsky is keeping true to the family-run atmosphere that made the shipyard a favorite for customers and employees alike.

Before you start thinking this is a “client buys shipyard to save it” story, it’s not. Although it’s true that the 115-foot (35.05-meter) Cazador is a Nordlund, focused on long fishing trips since delivery in 2018, Machovsky never intended to buy the yard. Rather, he says, “Paul and Gary were gracious in letting me continue the legacy of Nordlund.” He further says, “I didn’t want to see a North American legacy and especially one on the West Coast go away.”

Preserving the legacy partly comes through employing many of the same craftspeople who contributed to Cazador and prior builds. In fact, Machovsky says, some craftspeople have 18 years of experience at Nordlund Boat Company. One in particular has 30 years’ experience. Machovsky personally attests to the “very collaborative, team environment,” in which “the client takes the whole journey with the yard crew.” This experience with Cazador, but also abundant time aboard the 86-foot (28.25-meter) Tigress, from 1998, left an impression. Machovsky and his boss spent more than a decade running that yacht before returning to build Cazador. (Tigress started construction at Nordlund and finished at McQueens Boatworks.) Machovsky is intent on maintaining the close relationship between customers and craftspeople. “I’ve been on the other side of that desk too many times,” he says of poor experiences elsewhere.

Nordlund Boat Company is maintaining its relationship with Tim Nolan for naval architecture, too. And, buyers will still get fully custom yachts. “We want to deliver something clients can’t find somewhere else,” Machovsky says. That pertains to refit, too. The addition of this work simply makes sense to him. “We’ve expanded our yard to allow access to that full-service experience,” Machovsky says. Customers have already taken advantage of it as well, starting this past winter. Ultimately, whether with a new build or refit, he says, “What we have to offer is the same feeling fostered over 60 years of Nordlund family.”

The bottom line? “My daughters and I are picking up the torch for Nordlund, but it’s not about me,” Machovsky asserts. “It’s about the craftsmen and the client’s vision.”