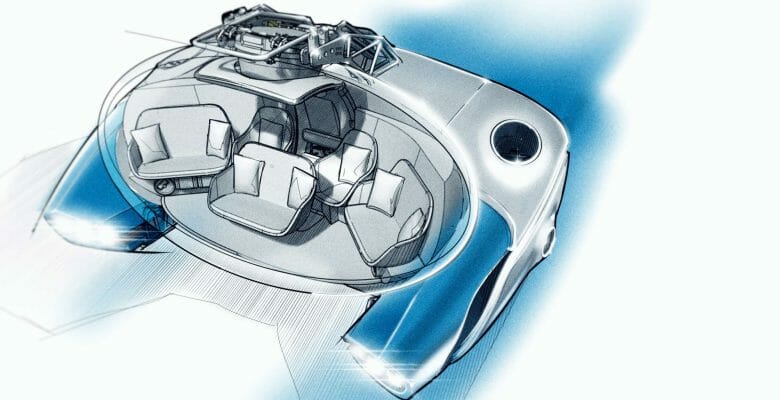 Triton Submarines is a go-to supplier of superyacht subs. Espen Øino International is a go-to designer of superyachts. It was only natural to both companies, then, to collaborate. The Triton 660/9 AA EO Edition shows off exterior styling and interior design by the renowned studio. Simultaneously, it offers an exceptionally tailored, and exceptionally spacious, interior.

Triton Submarines initially revealed the Triton 660/9 AVA late last year. Capable of depths to 660 feet (200 meters), it seats up to eight passengers plus a pilot. More noteworthy, though, those passengers can stand, and even walk around. In fact, the configurable seating means you and your guests can enjoy different experiences. So, while you can venture on a traditional exploration, you can instead indulge in a cocktail party, or fine dining. Host an underwater wedding ceremony or other special occasion, too. Whatever the intention, the sensation should be much like reaching out and touching the undersea life. Triton Submarines’ design partner, Dark Ocean Deepsea, has created an acrylic hull that appears seamless with the water surrounding you when you submerge. (On a related note, its oblong shape is what allows such a voluminous feel inside.)

Espen Øino International’s conceptual designs for the superyacht sub lend differing planes and angles. Of course, customers wishing to customize the exterior looks to match their mothership can do so.

Patrick Lahey, Triton Submarines’ president, says that the design studio, which he considers “the pantheon in yacht design,” approached his company to work together. He adds that the Triton team is excited about the future, too. “To be able to offer our respective clients submersibles that are uniquely styled, both on the exterior and interior, is a thrilling new direction for all parties involved, including yacht owners.”

While the Triton 660/9 AA EO Edition is the first project between Triton and Øino, it’s certainly not the last. They’re revealing additional models at the Monaco Yacht Show this month and the Fort Lauderdale show next month.