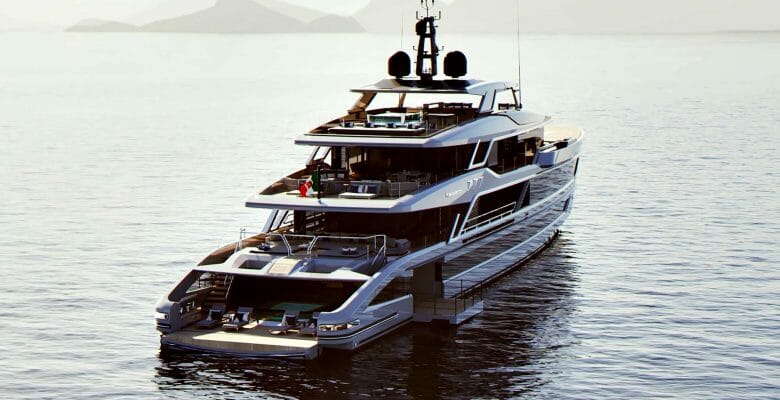 If recent experience is any indication, the largest Baglietto T Line superyacht series will land contracts before the first hull hits the water. The 197-foot (60-meter) Baglietto T60 builds on the success of a series that has six orders so far. More noteworthy, however, the new series redefines open space in ways rarely, if ever, seen.

Like the other yachts in the T Line series, the new series has styling and interior arrangements from Francesco Paszkowski Design. In fact, with a volume around 1,000 gross tons, the T60 picks up where the T52 leaves off. (That series, by the way, has six current orders, including hull number five for American owners. All are either in build or about to start.)

Even though the new design bears a family feel, she sets new precedents for interior and exterior design. Firstly, the shipyard and design studio are incorporating slide-open, floor-to-ceiling glass all around the main saloon and upper deck. The airiness comes into play the most, though, with the saloon. Part of an open-concept floorplan with the dining area, it flows freely to a wide stairway, itself quite open, too, leading down to the beach area. With a pool, a bar, and a conversation area, the beach area is 646 square feet (60 square meters). When considered with the saloon and dining area just above, the result is nearly 1,076 square feet (100 square meters) of sweeping living space.

The owners’ party of eight has yet more openness to enjoy. Baglietto prides itself on creating extensive sundecks, and the Baglietto T60 remains true to form. About 1,776 square feet (165 square meters) of sunning, dining, and cocktailing unroll fore to aft. Small and big groups alike can gather up here without issue, whether for private cruises or extended parties.

Wisely, the Baglietto T60 incorporates an entire level for the crew’s usage. Beneath the lower deck, with their quarters for 11, lies an under-lower deck. It’s home to cold rooms, a wine cellar, and stowage, including for guests’ luggage.

Available with an entire owners’ deck instead of the upper-deck for all to enjoy, the Baglietto T60 further has plenty of tender and toy room. A touch-and-go helipad is at the bow, for instance. Meanwhile, the tender garage, directly beneath, can hold an assortment of PWCs and a 23-foot (7-meter) tender.

Baglietto intends to start construction on spec in the coming weeks. Regardless of whether or not she sells soon, she should be ready by the end of 2025. Traditional diesels or hybrid propulsion are available, too, yielding a top speed of 16 knots.