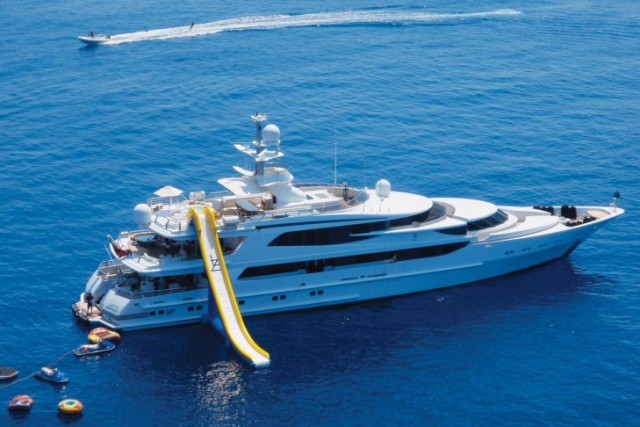 Talk with any yacht owner or charter guest, and chances are the conversation will soon turn to the toys onboard. As beautiful and highly engineered as the megayachts themselves are, the big attraction is the fun to be had off their decks.

Of course, no one’s content having just PWCs at hand anymore. Kayaks, towable banana boats, and similar riding craft aren’t enough, either. People crave more excitement… maybe even more experiences akin to the fun they had when they were young.

The following are some of the most coveted watertoys on the market. They’ll treat the young and young at heart alike to a heckuva good time.

1. Water slide. The charter yacht Lazy Z (above) is highly touted for her arsenal of toys, and rightfully so. With a handful of PWCs, wakeboards, kneeboards, waterskis, and snorking and diving gear, she makes it impossible to complain there’s nothing to do. But one toy stands above the rest: the waterslide. It’s the fastest way to get from the sundeck to the sea. FreeStyleSlides, a company that works with resorts and camps as well as yacht owners, custom made the slide for Lazy Z and will do the same for other interested parties.

2. Water trampolines. Ever bounce on a trampoline when you were a kid? It’s just as much fun as an adult, especially when you can bounce yourself straight into the water to cool off. A few companies, notably Rave Sports and Island Hopper, manufacture water trampolines, which several private and charter yachts alike carry. Both manufacturers make inflatable trampolines, which float a few feet away from the yacht so that the crew can keep an eye on everyone. When not in use, they deflate for easy stowage. Prices range from a few hundred to a few thousand dollars, depending on the diameter of the trampoline. 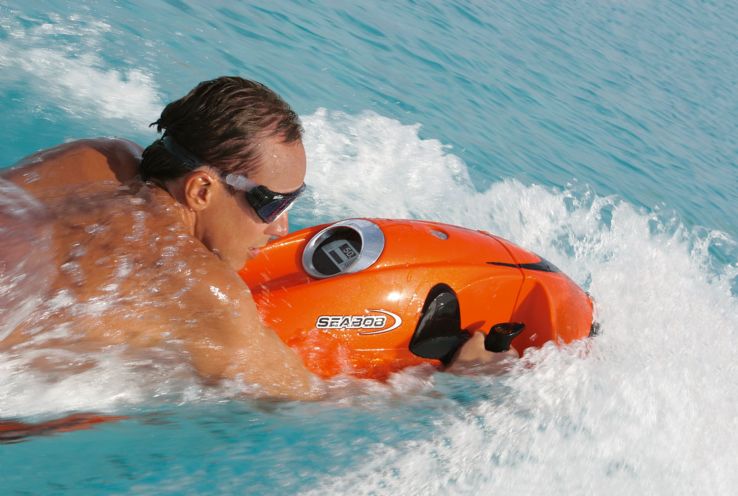 3. SeaBob. Many private and charter megayachts alike tote these terrific toys (above). SeaBob is a watersled, held and maneuvered with your hands in front of your body. It lets you zip along the top of the water at 14 mph, but better yet, you can dive to depths of 120 feet and cruise underwater at 10 mph. The housing is waterproof, and a lithium battery provides propulsion power. Therefore there are no harmful emissions. A variety of models are available, in a handful of bright colors. Suggested retail prices range from €7,485 to €12,680 (about $10,400 to $17,630).

4. Power surfboards. Powerski is the manufacturer of the only motorized surfboards on the market. A two-stroke engine delivers the power you need, and a pole at the tip of the board lets you control how fast you go (nearly 40 mph, if you wish) and in what direction. There’s also a kill switch on the pole. The surfboards can be operated in flat-calm waters, too, unlike their original cousins. Prices vary.

5. Hovercraft. Exuma has one, specifically the Hov Pod three-seat model. Hov Pod’s various models have been used by the United Nations and sold via Harrod’s department store in London for several years. It recently began offering build-your-own kits, too. Universal Hovercraft is another company targeting yacht owners, offering just build-your-own kits. Either way, hovercrafts let you go from the water to sand and back again effortlessly, zipping along at speeds of 45 mph and up. Universal Hovercraft kits range from $5,200 (supply your own engine) to $28,000 (engine included, craft partly built).

6. Mini submarines. When Mine Games debuted at the Fort Lauderdale International Boat Show a few years ago, dockwalkers stopped dead in their tracks. Why? The yellow submarine that sat on her aft deck. Made by Triton Submarines, part of U.S. Submarines, it’s ABS classed and made specifically for yacht applications. It permits the captain or another certified operator to take a passenger down 1,000 feet. Newer models can descend more than 3,000 feet and take two passengers plus the operator. Another company making mini subs: U-Boat Worx, whose newest model, the C Explorer 5 Sub can take five people down a little more than 300 feet. It’s priced at €966,000 (about $1.343 million). Triton’s offerings range from $1,970 to $2,990, though its parent company also offers far larger and more expensive models, up to $90 million.