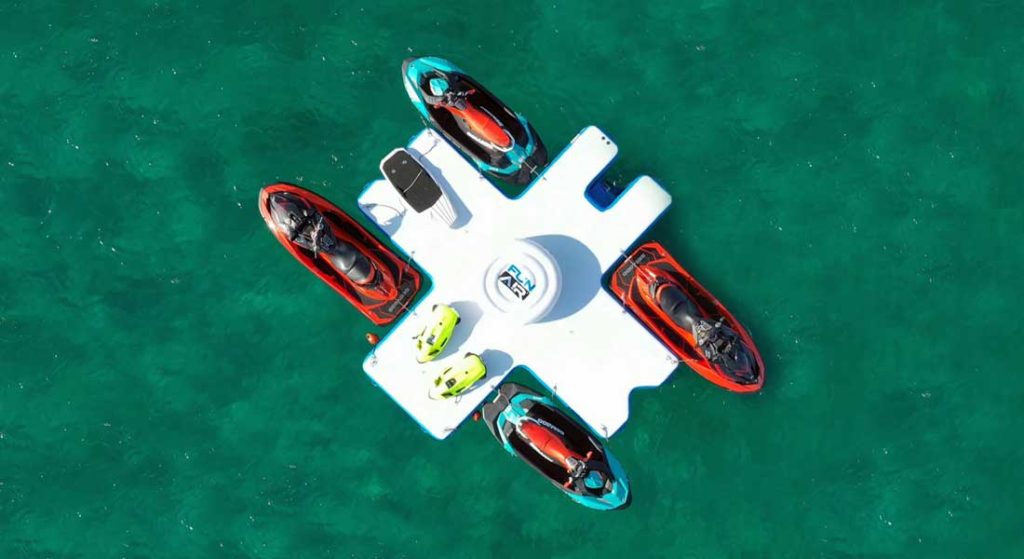 Okay, so you have a bunch of SeaBobs and PWCs that you just can’t live without. But, there’s only so much room on and around the swim platform as you and your guests hop on and off all day. Enter the Toy Island, the latest offering from FunAir. It’s more than an organizer. It lets you “dock” several toys around a large central seat, providing a spot to swap equipment or take a breather before zipping off for more thrills.

Like the rest of FunAir’s products, Toy Island is inflatable. It attaches in two different ways, depending on your (really, your crew’s) preference. One option allows it essentially to become an extension of your swim platform. The other, as seen below, sees it tethered off the transom, as a true toy island. In fact, the megayacht Latitude, partially visible in the photo, opted for this arrangement. She’s the first customer to take delivery. Yet another option: tether it off the beach. 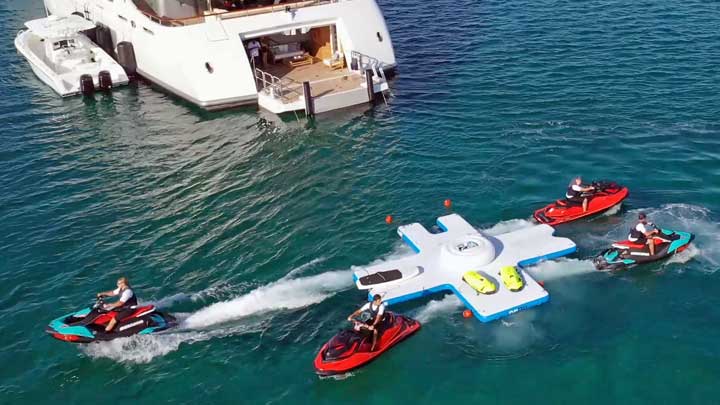 As mentioned, the Toy Island has a central seat. Grown-ups can sit and wait their turn while you get your little ones’ flippers fitted. Or, the kids can sit together and swap equipment. Alternately, just use it as a spot to rest, and take pictures of everyone having a great time. Because it’s tailor-made for your needs, Toy Island can hold a variety of different watertoys. For instance, you can group together four PWCs, or sailing dinghies. No sailing dinghies? No problem. Stand-up paddleboards, SeaBobs, Jet Surfs… you name it, FunAir will dock it.

Making Toy Island even more versatile, FunAir equips each with its FunAir Sea Stairs. This way, you and your guests can enter and exit the water with ease. Finally, for your crew’s sake, the product packs down small, and relatively light weight. Specifically, it’s 3’9” by 2’6” by 1’3” (120 by 80 by 40 centimeters) and weighs 232 pounds (150 kilograms). If that latter figure sounds like a lot, consider the average PWC weighs nearly four times as much.

You can see a fully inflated island at this week’s Monaco Yacht Show.